O’Rourke just one win away from Tokyo Olympics 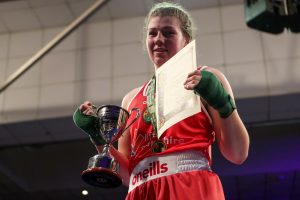 Aoife O’Rourke is just one way win away from qualifying for the Toyko Olympic Games following a dominant performance against Viktoryia Kebikava at this afternoon’s qualifiers at the Grand Dome in Paris.

The Castlerea boxer prevailed on points after a split decision, with one judge, unbelievably, giving the fight to her Belarussian opponent.

The European middleweight champion has now reached the last eight of the 75kg middleweight division where another victory this weekend will ensure she boards the Team Ireland plane for Tokyo.

O’Rourke exploded from the blocks and dominated the opening round. Her right hand caused Kebikava all sorts of problems as the dynamism and volume of punches being thrown by the 23-year-old from West Roscommon, particularly in the middle of the round, was at a level above her opponent.

The second round was a closer affair as Kebikava got some joy from a flurry of body punches, but O’Rourke’s speed of movement continued to be a problem for her 35-year-old opponent — a nine-time champion in Belarus.

Knowing that, realistically, she had to keep out of trouble in the third round, O’Rourke used the space in the ring brilliantly, picking her moment to land some decisive blows.

Overall, it was a very impressive performance from O’Rourke and it augers well for the rest of the competition.

Just one more win, and she’ll realise a lifetime goal of becoming an Olympian.