Richael to represent Ireland at World Championships in Portugal 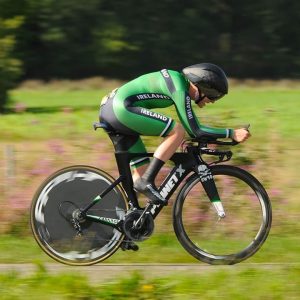 Richael Timothy is one of the top para-cyclists in Ireland.

Richael Timothy has been selected on the nine-strong Ireland paracycling squad that will compete at the World Championships next week.

The Ballymoe native will take part in the championships being held in Cascais, Portugal, between June 9th and 13th.

Irish athletes will compete in both Road Race and Time Trial events, and many will be targeting medal-winning performances.

Richael, a former Roscommon underage footballer, will compete in the WC3 Road Race and WC3 Time Trial competitions. She has already qualified for the Summer Paralympic Games scheduled for Tokyo between August 24th and September 5th.

It is the first time in almost 16 months that Ireland’s paracycling squad will compete for medals at a World Championships. The extended break from competitive action has not deterred the athletes as they remained focused on their preparation and long-term development.

“The training process has been intensive for a long time now so getting the opportunity to translate that work into racing against the world’s best is something everyone is keenly looking forward to.

“The impact of Covid-19 has restricted racing opportunities globally and made planning very challenging this year, so the upcoming World Championships has an increased importance in the context of Tokyo Paralympic selection and preparation,” said Cycling Ireland National Coach, Neill Delahaye.

Watch Richael’s preparations with the Irish team below…