Carty makes US squad for tests against England and Ireland 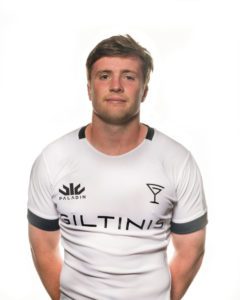 Former Roscommon minor footballer Luke Carty has been picked in USA Rugby’s 30-man squad for next month’s July tests against England and Ireland.

Gary Gold’s side play England in Twickenham on Sunday, July 4th, before travelling to Dublin to play Ireland at the Aviva Stadium six days later. Carty’s inclusion means that he could win his first cap against his native country.

The Barrymore native currently plies his trade with Major League Rugby outfit LA Giltinis and is one of ten uncapped players in the US squad for next month’s tests.

Carty is eligible to play with the USA through his grandmother (his father Ted’s mother) who was born in New York before coming back to Ireland. Family is important to the 23-year-old. His brother Jack is the current Connacht out-half, having gone to the World Cup with Ireland in 2019. Another brother, Ben, made it to the Connacht sub-Academy.

Just like his older brother, Luke made a name for himself with Roscommon underage teams. He fondly recalls his time in St. Brigid’s where the Lennon brothers — Brian and Tom — among others encouraged him before he burst onto the intercounty scene in 2014 under minor manager Fergal O’Donnell.

A 2-16 to 0-14 defeat against Mayo in Connacht final was followed by a narrow 0-10 to 1-5 loss in the All-Ireland quarter-final in Markievicz Park against a highly-rated Donegal team, managed by the county’s current senior boss Declan Bonner, that would go on and reach the All-Ireland final. Yet, Roscommon almost staged a shock with Evan McGrath coming within inches of grabbing a winning goal in injury time.

He still follows the fortunes of all Roscommon and St. Brigid’s teams, particularly at senior level where Brian Stack, who soldiered alongside him at minor level seven years ago, is one of his best friends.

“I really loved it. Myself, Jack and Ben — we gave everything a crack. We got close to Mayo in the Connacht final (in 2014) before they got a goal to set them on their way. I remember we nearly won the game up in Sligo (against Donegal),” he told the Roscommon Herald last week.

Ankle surgery the following year curtailed his involvement when Jimmy Gacquin was manager as Roscommon were knocked out of the provincial championship by Sligo in Kiltoom.

“I came back three or four weeks before the first round of the championship. I came on against Sligo after ten minutes and was black carded 30 seconds later, and that was the end of my Roscommon career,” he laughed. 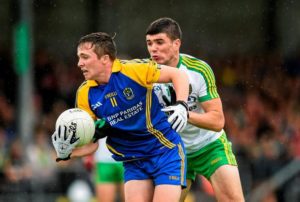 Luke Carty in action for the Roscommon minor footballers against Donegal in 2014.

In February 2020, he was told by Connacht that he wasn’t part of their future plans, but Head Coach Andy Friend sounded out an Australian friend, Darren Coleman, who was involved with Sydney-based outfit Gordon Rugby.

“I was all set for Australia and then Covid put an end to it. At that stage, I just decided that I’d do a Masters in UCD and play rugby with Buccaneers. I wasn’t really going chasing it anymore. But then, during lockdown, I had a little more time to think about things and I wasn’t content,” he admitted.

Carty got in touch with agent Keith Matthews who cast out the net in search for offers, and then the phone call came.

“I was at home during lockdown, not doing much. I was up watching a movie with my brother and the phone started ringing. It was an Australian number. It was Darren Coleman. He had just accepted the head coach job with LA Giltinis, and he wanted me to join. It was all done in a couple of days.”

Yet, Carty had doubts whether he’d be away from Athlone for long. He put pen to paper a year ago before playing the waiting game. Even when he finally reached California, after getting his visa sorted, he wasn’t convinced that the season would be completed.

“There wasn’t much going on and I was given this opportunity, so I had to go for it. Given the way everything was at the time, there was a doubt in my head whether it would go happen at all. But it has worked out pretty well,” he insisted.

Carty currently alternates with former Australia player Matt Giteau for the number 10 jersey — all in the name of “getting the job done.” With the option of a second year at the end of the season, the South Roscommon native doesn’t see himself changing his current scenery for the foreseeable future.

“I suppose the ball is in my court. I feel it will only get better. There were some teething problems getting set up with Covid and visas. Now 90 per cent of us are vaccinated. Things are beginning to relax. It has worked out pretty well.

“When I was going out, I was telling my parents that the season might be called off after a few rounds. Now, if you dropped me here not knowing anything about Covid, you’d say there’s nothing strange going on.

“I’m in training at 7 in the morning. We train really hard but we’re done by lunch-time and then you might end up sitting on the beach for a few hours. I also just finished my second semester for my Masters in International Business with UCD Smurfit School. I’ve an internship lined up for the third semester, so that will take care of time outside of rugby.

“A year ago, I was nearly packing it in because I wasn’t enjoying my rugby. Now, I’m over here playing in the sun and enjoying myself. If you were to say that I’ll be in a US squad getting ready for a World Cup in two or three years’ time, I’d take your hand off. But I’m just going to take it as it comes, just keep working hard and try to get better every week,” he explained.