O’Rourke returns to the ring in Paris 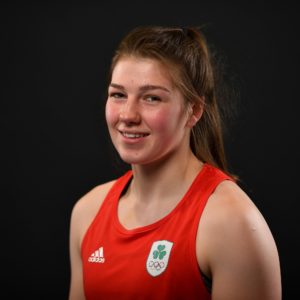 Aoife O’Rourke is back in the ring at the Grand Dome in Paris this afternoon (Monday) when she takes on current world champion, Lauren Price from Wales, in the semi-finals of the Olympic qualifiers.

The Castlerea boxer secured her passport to the Olympic Games in Tokyo on Saturday evening when she saw off the stubborn challenge Elzebieta Wojcik, overturning a first round deficit to secure the biggest win of her career.

This afternoon’s fight is scheduled to take place in Ring A at 2 p.m. and will be broadcast live on www.olympics.com

O’Rourke has crossed paths with the Welsh boxer in two previous bouts, with Price winning on both occasions. However, O’Rourke’s coach, Paddy Sharkey from Castlerea Boxing Club, believes that the 23-year-old from Tarmon can cause an upset.

“When she fought her (Price) before, I personally thought that she won the contest. Then the second time, I felt the referee didn’t do his job as Price kept holding her.

“Aoife is the massive underdog going into this fight but that’s not to say she won’t pull it out of the bag.” he said.

A win for O’Rourke this afternoon would see her into the final on Tuesday alongside boosting her ranking points ahead of the Olympics next month.

The Irish team are due to return home from Paris on Wednesday.