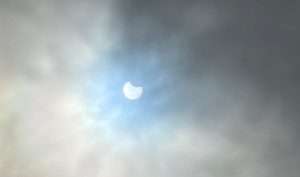 People living in parts of County Roscommon were lucky enough to witness this morning’s partial solar eclipse, which peaked just after 11 a.m..

While most of the country was covered in a blanket of cloud, the skies partially cleared, particularly in the southern half of the county, to enable people to see between a third and half the sun’s diameter being covered.

It is the deepest partial eclipse since March 20th, 2015, and, according to Astronomy Ireland, there will not be a deeper partial solar eclipse from Ireland until March 29th, 2025.