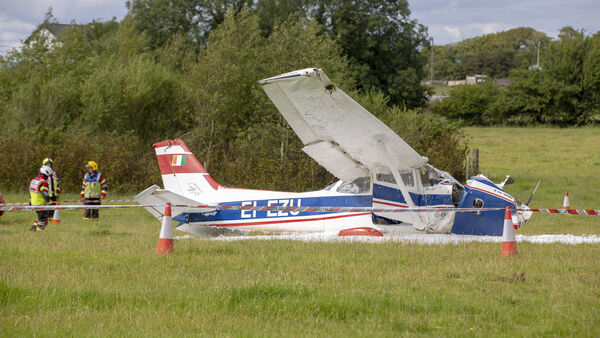 A 65-year-old pilot and his passenger on a flight to Roscommon last summer narrowly escaped death when engine failure led to a crash landing in a Galway field.

A report from the Air Accident Investigation Unit Ireland (AAIU) into the incident involving a Cessna small aircraft near Killimordaly in Galway found that the pilot’s attempts to land the plane meant he hit the ground hard in a farming field, severely injuring himself and his passenger in the process.

The type of fuel used during the flight was found to have been a contributory factor in the crash.

The AAIU said in its report that the plane was en route from Rathcoole Aerodrome in Cork to Tibohine Airfield in Roscommon when the pilot noticed oily smoke and engine oil pressure decreasing north-west of Loughrea in Galway on July 11, 2019, the Irish Examiner reports.

The engine then failed, and the pilot made a mayday call to Shannon Air Traffic Control (ATC).

“Mayday, Mayday, looks like I’m having an engine failure, serious loss of oil pressure, I’m going to have to make an emergency landing,” the pilot told Shannon ATC, which acknowledged the transmission and advised that there was no known air traffic in the vicinity.

No further transmissions from the aircraft were received by Shannon ATC, despite several attempts to contact the aircraft, the AAIU said. Impact occurred two minutes after the mayday call, the report stated.

“During the attempted landing in an agricultural field, the aircraft contacted the ground hard and sustained substantial damage, resulting in the serious injury of the pilot and passenger.”

People passing by came to their aid, and luckily the aircraft did not catch fire. The passers-by, including motorists, helped remove both pilot and passenger from the plane.

In an indication of how lucky the two were to be alive following the crash, the AAIU outlined the severity of the damage done to the plane, according to the Irish Examiner,

“The aircraft was substantially damaged as a result of the impact sequence. The outer part of the left wing was bent upwards. This part of the wing had also sustained damage to its leading edge. In addition, there was significant creasing and bending on the left wing’s upper surface at the wing root. It was subsequently identified that the top section of the fuel tank fitted inside the left wing was damaged, exposing the fuel to atmosphere,” it said.

In its conclusions, the AAIU said the aircraft, manufactured in 1977, was “routinely operated on automotive gasoline (Mogas), which was not approved for use and is less resistant to detonation than the approved fuel (Avgas)”.

The certificate of airworthiness was valid, as were the pilot’s licence, ratings, and medical certificate.

The report said the probable cause was the “loss of control due to stall and wing drop of the left wing at a low height during a forced landing following a detonation-induced engine failure”.