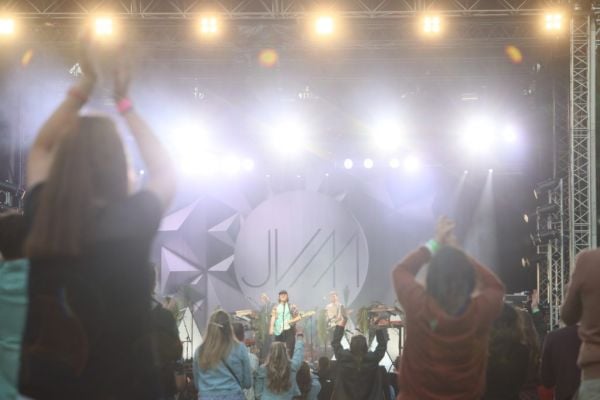 Music fans who attended the first large-scale concert in Ireland since the pandemic began described the experience as “emotional” and “surreal”.

It is the first in a series of pilot live entertainment events, employing staggered arrival and leaving times for fans, who remained in pods of up to four people.

Demand for the gig was huge, and tickets sold out almost instantly.

Those who managed to get their hands on them couldn’t believe their luck.

Tanya Quinn and Orla Ormond, both from Dublin, said it felt “surreal” to finally attend a concert.

“I think back to this time last year and something like this happening, it’s kind of surreal” Orla said.

Reflecting on the scramble for tickets, Tanya said:  “I had taken on the big task of trying to get the tickets, and fighting with the website for 25 minutes. After a lot of refreshing I finally got the tickets.”

“And I swanned in then after the hard work was done” Orla joked.

Tanya added: “It feels amazing, absolutely amazing. I went to a small gig in March 2020, before everything shut down. I guess my last proper gig would have been December 2019.

“It’s pretty good. 500 people, it’s not a bad crowd. It kind of feels like it’s going back to normal, which I think is important. I’m just looking forward to a bit of freedom,” he said.

He was joined by his friend Claire Murphy from Co Cork, who had managed to snare the coveted tickets for them.

She said: “I don’t know how it happened. I was just refreshing a lot, clearing my cache. I knew they were sold out, but somehow two showed up. I thought it sold out in three minutes, but I got them 25 minutes after.

“It’s unreal. Everybody is saying ‘how did you manage to get two tickets?’ I had three devices going. It’s going to be emotional I think.”

“I think it’s about time that they’re finally doing something for the music industry.”

Speaking before the show, James Vincent McMorrow described returning to the live stage as “magic”.

“It feels incredible. It is a feeling I haven’t personally felt in the longest time,” he told Newstalk.

“Even the last shows I played my expectation was there would be another show, but there wasn’t.

“I’ve been doing this for the last 10 years, so you get a different feeling. You get butterflies but it is not the same. So today I woke up and it feels like, I don’t know, like magic.”

He described feeling a sense of personal responsibility to fans, many of whom were coming to their first concert in over a year.

He said: There is obviously a weight of expectation that you can’t help but feel.

“This is the first proper, proper show back in a long time and I want to do it justice. I want to really live up to that expectation and show something.”

He said musicians have found the pandemic particularly tough, with many feeling they were at the back of the queue for a return to normality.

“If you don’t work with music, it’s very hard to describe it. I assume it’s comparable to other industries, but this is the only one I’ve known” he said.

“This is a group of people who all live the same life, whether it’s a guitar tech or someone in my position, or in a band.

for anyone who didn’t manage to get a ticket for the show tomorrow, I’m really happy to announce that we’re live streaming the show in Iveagh Gardens on Youtube!

“To see that come back yesterday, when we went down to the Iveagh Gardens to do our first soundcheck was honestly the greatest thing I’ve felt in the longest time.

“Seeing all these people that I got so used to seeing, and hadn’t seen for a year-and-a-half. It was really magical.”