Foster speaks of her regrets during time as First Minister 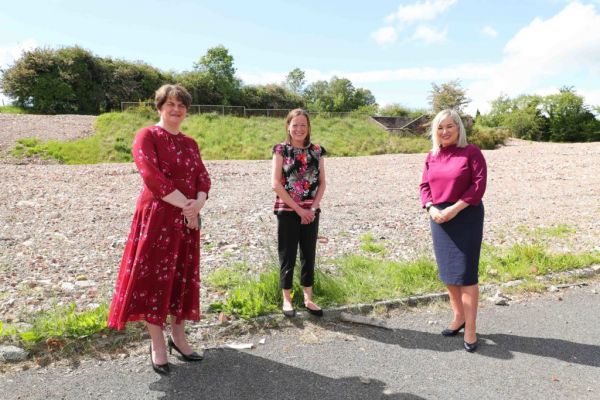 Outgoing First Minister Arlene Foster has spoke of regret at not having had the opportunity to have done more as the North’s leader.

Mrs Foster’s last official engagement will be a meeting of the British-Irish Council in Co Fermanagh later today, where she is expected to formally stand down as First Minister. Her replacement, Paul Givan will assume the role on Monday, having been chosen by DUP leader Edwin Poots earlier this week.

Mrs Foster spent 18 months in the role following the resurrection of the Stormont Assembly in January 2020.

Speaking at her last joint Executive press conference with deputy First Minister Michelle O’Neill on Thursday, Mrs Foster said she wished they had had the opportunity to do more.

They spoke together at the site of a former high school in Lisnaskea in Mrs Foster’s native Fermanagh, which is set to be redeveloped as a shared site for an Irish medium school, a health centre and a victims group.

Mrs Foster shared that she used to attend Girl Guides at the former school, and welcomed plans to transform it into a flagship project which she said she hopes will “speak to reconciliation right across Northern Ireland”.

Ms O’Neill paid tribute to Mrs Foster, adding all of the Executive wished her well at the conclusion of her last meeting earlier in the day.

Mrs Foster said when she and Ms O’Neill came into post in January 2020, they were focused on delivering the commitments made in the New Decade New Approach deal.

But from news of the first case of Covid-19 in February, they became “consumed” with trying to protect lives and livelihoods.

“It has been a hugely challenging time to be a politician because we tried to make decisions for the good of our community but we do understand that people will want to critically analyse all of that and what has been going on over this last 18 months,” she said.

“We didn’t have the opportunity to do some of the things that we wanted to do as an Executive.

“I regret that we won’t now be able to do that, and lead the Executive together into doing a lot of those things that we had set out in New Decade New Approach.

“That’s for others to do now and I do wish the new Executive well as they take on the challenges.”

Ms O’Neill described it as a “baptism of fire” from January 2020.

She said they had established a good working relationship and also spoke of regret that they did not have the chance to work further together.

“There is much more that unites us as people than divides us,” she added.