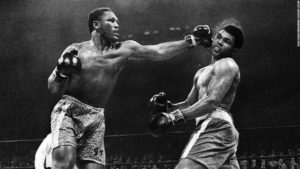 Joe Frazier and Muhammad Ali in action a few months before Frazier came to Castlerea.

Fifty years ago on this day — June 11th, 1971 — it’s fair to say that one of the world’s greatest boxers finally met his match in Castlerea.

Four months after defeating Muhammad Ali in one of the world’s greatest boxing bouts, Smokin’ Joe Frazier landed in Ireland for a music tour of all things.

He predicted that “singing was much harder than boxing.” How those words would ring true after being rescued by Gardaí from an “unruly mob” in West Roscommon.

Ireland’s showband scene was heaving at the time and Frazier was scheduled to do ten performances in six nights. Derry, Donegal, Belfast, Castlebar, Castlerea, Dublin, Limerick, Tralee, Youghal and Cork were his ports of call.

Frazier arrived in Belfast on June 8th, 1971. However, the hoopla surrounding his arrival was soon replaced by the reality that the man was here to make money, forcing promoters to hike up admission prices.

At between £1,000 and £4,000 per performance, Frazier became the best-paid performer ever to grace these shores. The end result was near empty venues.

Having snubbed journalists for a scheduled press briefing in Dublin, Frazier opted to spend one day on the main street in Ballymahon, County Longford, signing autographs for all those who wanted them. Seemingly, he was on his way to Castlebar where another pitiful crowd greeted him.

Next stop Castlerea where a large crowd had gathered outside the Casino Ballroom ahead of his much-anticipated performance.

There were around 500 people waiting outside the ballroom. When Smokin’ Joe’s Rolls-Royce pulled into the West Roscommon town at 1 a.m., they converged, and things began to turn ugly.

According to reports, around 500 punters had paid to watch his performance, and there was a similar number outside, hoping to catch a glimpse of the man that had beaten Cassius Clay. Due to demand and the opportunity to make a quick buck, those in charge had increased the admission price.

As the crowd swooped down on his car, the atmosphere turned quite nasty. Gardaí somehow managed to get Frazier into the hall but the remnants of what happened only moments earlier remained.

A charge was made towards the door of the Casino Ballroom, causing timber to crack, while the glass at the office where people paid in was broken.

A riot was brewing as others jumped onto the ballroom’s roof and cars nearby. As for Frazier’s Rolls-Royce, it was going nowhere. One Garda was hit by a flying rock. Eggs were being thrown. The sound of broken glass filled the air. Chaos was rampant.

When Frazier finished his performance, Gardaí succeeded in getting him out a side door where he was whisked away in a patrol car. According to onlookers, Frazier was “visibly terrified” and “shaking with fear”.

Forget about humbling Muhammad Ali, Smokin’ Joe Frazier had the toughest night of his life, and nearly paid the price, in Castlerea!