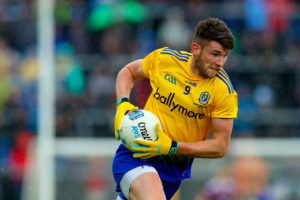 Shane Killoran was one of Roscommon’s better players against Kerry.

With Roscommon teams vying for places in league finals and trying to stave off relegation, it’s a bumper weekend of sporting action

Johnny Keane’s side appear to have it all to do after suffering a 27-point reversal against Kildare last weekend. At the same time, Derry were edging out Donegal in a thriller, meaning the home side will have all the momentum behind them.

On the plus side, one big performance from Roscommon and they will send Saturday’s opponents through the relegation trapdoor. But it’s hard to see where that performance will come from on the evidence we’ve seen so far.

Roscommon are in transition and may need a year or two in the lower divisions to adapt to so many new players being integrated into the set-up.

Frank Browne’s side make the long trip to County Cavan, buoyed by victories against Mayo, Louth and Kildare.

Apart from the opening half against Mayo, Roscommon have had things pretty much their own way and therein lies the danger against a Tyrone side that will be far more competitive than Louth and Kildare.

But the high scoring averages accumulated may be a sign that a re-energised Roscommon are finally finding their form after a few years in the wilderness.

It will be a huge disappointment for all concerned if they don’t reach the league decider.

Would the real Roscommon please stand up?

If it’s the one that struggled against Fermanagh and Sligo, then Diane O’Hora’s side can wave goodbye to their league final chances.

However, if the purpose and style that was displayed against Down bear fruit against Laois, then there’s every chance this team can have a league decider to look forward to.

Inevitably, the new manager is trying to find the best position for key players and that leads to inconsistency. But, after three games, things should start to settle down and a much-improved Roscommon showing should be on the cards next Sunday.

The one that Roscommon have been preparing for — well, at least, that’s the hope.

Armagh are desperately unlucky to find themselves in this position after beating Monaghan and drawing with Donegal, but it’s their inability to see out games that has proved to be Kieran McGeeney’s side’s undoing.

Armagh aren’t as good as Dublin or Kerry but the evidence this season suggests that they’re on a par, or even better than Galway. So, Roscommon’s poor performance in Salthill a few weeks ago has naturally raised doubts.

If Anthony Cunningham’s men harbour ambitions of going anywhere later this summer, some hard evidence to back up that theory needs to be produced on Sunday.