‘What the hell has just happened, I’m an Olympian’ 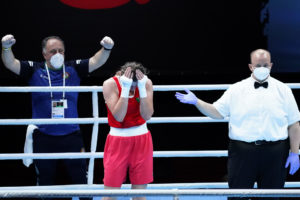 Aoife O’Rourke has described the myriad of emotions she felt the moment she knew she was finally going to the Olympic Games in Tokyo.

Speaking to the Roscommon Herald from the comfort of her home  at Tarmon, Castlerea, Roscommon’s new Olympian admitted that she had no idea if she had beaten Poland’s Elzbieta Wojcik until her arm was raised in Paris on Saturday evening.

“Getting to the Olympics has been my goal for the last number of years. But it’s not until you’re given the chance to go out and represent your country, and actually qualify, that it becomes real.

“Pre-Covid, I really started to believe in myself, believing that it was possible. But it’s not until that moment comes and you’re given that chance — you just want it even more.

“I went into the fight knowing that I was nine minutes away from either qualifying or not. When I won the fight, I was speechless.

“I didn’t know how to feel. It was more like ‘what the hell has just happened, I’m an Olympian’. I was really positive going into the fight. I knew I had put the work in. Whatever happened was meant to be.

“When my arm was raised, I was feeling everything. I was excited, I was happy, I was emotional. I was all over the place. That night, I just remember going to bed smiling and laughing to myself,” she explained.

O’Rourke will fly out to Tokyo later this month in preparation for the Olympic Games that will get underway on Friday, July 23rd.