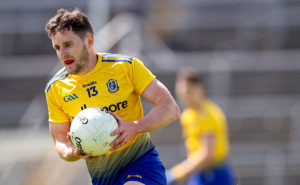 Ciaráin Murtagh has been Roscommon’s standout player of the league so far. INPHO/Tommy Dickson

Choosing the right road in sport, as in life, is never simple, even when you know the best road to take. This Roscommon side have arrived at numerous pivotal junctures during their development, and very often it has been Armagh trying to block their path.

Think of 2018 when Roscommon, still reeling after messing up in the second half of the Connacht final against Galway, picked themselves up off the canvass to book their place in the augural Super 8s after disposing of the Orchard County after a thriller in the Portlaoise heat.

Then, last October, a strong last 25 minutes, buttressed by rapid-fire goals from Enda Smith, via his second penalty of the evening, and a Conor Daly piledriver enabled Roscommon to pretty much confirm their return to Division One at the Athletic grounds in what was effectively the first intercounty match post-lockdown.

Now, the two teams meet again (this afternoon in the Athletic grounds at 3 p.m.), with the winner surviving in Division One, while the loser will fall through the relegation trapdoor after only five weeks. It will be like gaining entry to a Michelin star restaurant and being kicked out after half an hour to prepare for the next customers which, in this case, could be Mayo. Such is the climate we live in.

It’s a difficult game to get a handle on. Roscommon will arguably field a stronger team that they did nearly eight months ago. But which Roscommon will turn up — the one that were competitive against Dublin and Kerry, or the one that couldn’t handle a Galway team with something to prove after being humiliated by Kerry eight days earlier? The fact that Anthony Cunningham has picked the same starting 15 that tested Kerry suggests that the manager is getting closer to a settled side.

Armagh are something of an enigma as well. They finished their league campaign with three points and are desperately unlucky to find themselves in this position. But they’ve found a way to lose their way when in the ascendency, particularly during the games against Tyrone and Donegal.

They were the better team for 45 minutes of last year’s league joust against Roscommon, but they faded badly once the visitors hit them with two sucker punches in such a short space of time. Yet, they have the players to hurt the Rossies, particularly Stefan Campbell, and Oisín and Rian O’Neill who will keep Anthony Cunningham’s side’s defence as occupied as Cormac Costello, David Clifford and company did in recent games.

But the number of injuries picked up in their backline during this season’s shortened campaign could hurt them. Tyrone and Donegal found joy when they ran directly at the Orchard County’s rearguard. There were more glimpses of such straight running against Kerry, from a Roscommon perspective, and more will be needed on Sunday.

But Armagh will surely be feeling that they must win one of these crucial games against the Rossies at some stage. On the evidence of what we have seen so far, this afternoon presents them with their best chance but recent results between the counties and how sport’s psychology feeds into that, perhaps, gives Roscommon the Indian Sign over the men in orange jerseys, just as they have enjoyed, for the most part, against Cavan in recent years.

It was noticeable that Anthony Cunningham paraded a greater spring in his step in the aftermath of the encouraging display against Kerry. But he will also have noted that Roscommon let matters slip from their grasp in the final quarter when they were within touching distance of the winning post. Sunday’s challenge will require a 70-minute performance, something we haven’t seen in three games.

There were signs that Diarmuid Murtagh was much sharper against the Kingdom. His brother Ciaráin has been Roscommon’s standout player of the league so far. But he needs more help, and the responsibility will fall on Conor Cox and, to a lesser extent, Donie Smith in the full-forward line to provide it.

Shane Killoran brought an extra dimension to his side last time out. His range of passing and presence to give Roscommon an extra option on their own kickout made for better viewing around the middle of the field. The defence will need more tightening, although conceding 1-22 and 2-15 against Dublin and Kerry respectively isn’t the concern. It is the 2-16 coughed up against Galway, when more was expected, that remains the worry.

It’s all very well thinking that this season must be viewed through the prism of what happens in the Connacht semi-final against Galway. What transpires against Armagh, however, is inextricably linked. A loss in the Athletic grounds and it’s very hard to see Roscommon arresting the slide in early July. It just might be one relegation too many.

And therein lies the big question. Have this Roscommon team, having given us so many great days, peaked and are now beginning to slide back down the mountain? Is there a staleness setting in as evidenced by the performances against Mayo last November and Galway a few weeks ago?

The result today will go a long way towards answering those questions. There just might be a kick in the old dog yet.