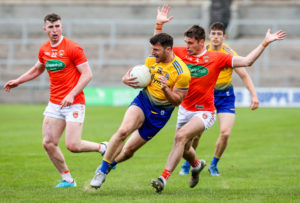 Armagh’s Tiernan Kelly and Greg McCabe, and Diarmuid Murtagh of Roscommon in action at the Athletic grounds. Picture: INPHO/Philip Magowan

Roscommon will be playing Division Two football in 2022 after being comprehensively beaten by Armagh, 1-17 to 0-11, at the Athletic grounds.

Roscommon started with intent, moving into a 0-5 to 0-1 lead after 13 minutes with Diarmuid and Ciaráin Murtagh kicking some superb points.

But the water break completely disrupted any momentum the visitors had built up, with two Jemar Hall points on the resumption hinted at a sign of things to come.

When Richard Hughes was overturned, Oisín O’Neill struck for a goal to confirm how decisively the pendulum had swung in Armagh’s favour.

Conor Cox and substitute Niall Daly did stem the bleeding before half time to leave Roscommon trailing by 1-7 to 0-7.

With Niall Grimley, Rian O’Neill and Stefan Campbell running the show in the second half, Armagh comfortably kept Roscommon at arm’s length to run out comfortable winners.