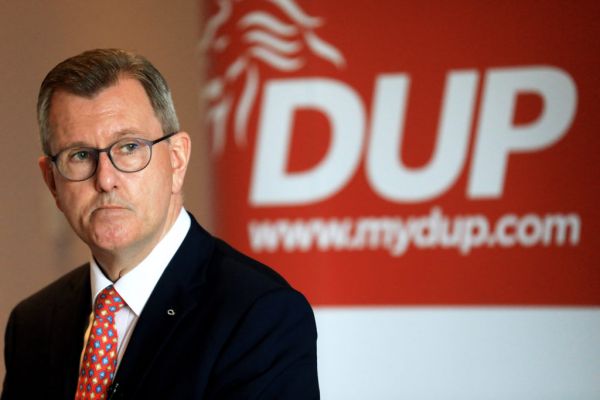 DUP leader Sir Jeffrey Donaldson has apologised to the LGBT community for hurt caused by past remarks made by members of his party.

The party has opposed gay marriage which was legalised in the North in 2020 following legislation passed by Westminster while the Stormont Assembly was not sitting.

Former party leader Ian Paisley previously led a Save Ulster From Sodomy campaign during the 1970s.

On Thursday evening, DUP deputy leader Paula Bradley said that some of the things said by the party over the past 50 years had been “absolutely atrocious”.

Speaking at a Pink News event, Ms Bradley said: “I can certainly say I apologise for what others have said and done in the past, because I do think there have been some very hurtful comments and some language that really should not have been used.”

“There is no doubt that in the past things have been said that should not have been said across a whole range of issues, and not just by the DUP, I have seen people on marches and at rallies say things about the DUP that have been hurtful to us and our members as well,” he told BBC Radio Ulster.

“I have seen things said about people from faith communities that have been hurtful and should not have been said.

“I think it is right to apologise when we have said things that have been hurtful to others.

“There are differences in our society, differences and deeply held views on social issues, and what I want to see in Northern Ireland is a discourse that is respectful of difference.

“People can hold their sincerely held views without the need to say things that are hurtful to others. We can disagree but we can disagree well.

“Where we have said things that have hurt others then it is right that we say sorry for that. Sorry needn’t be the hardest word,” Mr Donaldson added.