Keane critical of ‘small bit of arrogance’ among match officials 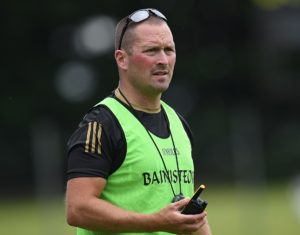 Roscommon senior hurling manager Johnny Keane has criticised the standard of refereeing, saying that he is sick of the ‘small bit of arrogance’ being shown by match officials during games.

Keane was speaking in the aftermath of his side’s heart-breaking 0-19 to 1-15 loss against Derry in this afternoon’s Christy Ring Cup match at Athleague where a strong second-half comeback by the visitors deprived the hosts of a famous win.

Derry had two players sent off over the 70-odd minutes, while another player was sent to the sin bin. On the other hand, Roscommon appeared to find it difficult to win a free in the second half, leading Keane to voice his frustration at the standard of officiating.

“Maybe I’m not allowed to say this, but I don’t know what you had to do to get a free off the referee in the second half. You can’t talk to these guys either. They’re a level above us. I’ll probably get in trouble for this but who listens to me?

“I’m just sick of it. Every single day of the week we come out, you’re told to shut up. You’re not allowed talk. That’s fine, maybe I talk too much anyway. But we do all the work, all the training. We do all the work behind the scenes. The amount of work that goes into this, and these guys turn up on a Saturday or a Sunday and rule the roost.

“In the second half, we couldn’t get a free for love nor money. To me, it was shocking. Derry feel the same, they got two guys sent off. I feel there’s a small bit of arrogance among referees and I’d like it changed because you can’t talk to anyone. Even the linesman won’t look at you or address you. Maybe it’s me but from talking to a lot of lads across the board, the same thing is happening,” he summarised.