Roscommon U-20 footballers off to a flyer 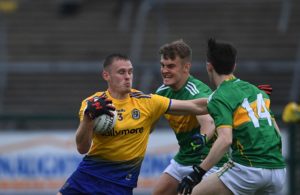 The Roscommon U-20 footballers booked their place in the Connacht semi-final against Sligo next Wednesday following a comfortable 4-16 to 0-10 victory against Leitrim at a damp Dr. Hyde Park this evening.

Four goals either side of half time by Adam McDermott, Ben O’Carroll, Darragh Heneghan and James Fitzpatrick put the game to bed as Liam Tully’s side flexed their muscles on competitive fodder for the first time this season.

Leitrim had competed well to trail by 0-10 to 0-6 as the game ticked into first-half injury time but two goals from Adam McDermott and Ben O’Carroll turned the game on its head.

With Daire Cregg impressing at left-half forward, ending up with 0-9 overall, Roscommon found scores easier to come by, but Leitrim were game opponents early on with Paul Keaney and Tom Prior causing the Rossies some headaches.

The sides were deadlocked at 0-2 apiece when Roscommon hit five unanswered points through Cregg (2), Keith Doyle, McDermott and O’Carroll to put some daylight between the sides.

But Leitrim gained some traction with Barry McWeeney, Prior and Keaney keeping their side in touch.

But disaster struck for the visitors just before half time as Roscommon, leading by 0-10 to 0-6, went for the jugular.

To make matters worse, Leitrim midfielder Gavin Reynolds was in the sin bin when the home side hit the after burners.

Firstly, Ronan Garvan set up Adam McDermott for the opening goal before Ben O’Carroll unselfishly squared possession for the Castlerea St. Kevin’s forward who was denied by Leitrim goalkeeper Seán Reynolds. But O’Carroll was following up to poke home the rebound to leave the young Rossies in control, leading by 2-10 to 0-6 at the break.

Things got even better for Roscommon on the resumption when Keith Doyle was sent galloping through on goal from the throw-in. The St. Dominic’s midfielder temporarily lost possession but Darragh Heneghan was on hand to lash home the loose ball.

Then, unbelievably, Roscommon struck for a fourth goal in their next attack as Doyle played in James Fitzpatrick and the Oran forward produced a tidy finish.

Both sides emptied their bench after that as Cregg continued to impress for the winners, while Tom Prior never gave up the ghost for Leitrim with a couple of eyecatching scores.

But Roscommon, who were without players like Shane Cunnane and Ruaidhrí Fallon, were already thinking about Sligo, who are sure to provide a much stiffer test in the Hyde next Wednesday.