Eyes on the big prize 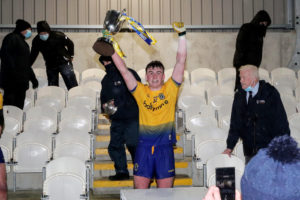 The dynamic has been transformed in the space of six and a half months. Storm Bella, which sought to wreak havoc on St. Stephen’s Day, has been replaced by a threatening Delta variant. The depths of winter have been replaced by long summer evenings. But one thing has remained constant — the Roscommon minors of 2020 have never taken their eye off the ball.

To hear manager Emmet Durney refer to his players as a “remarkable group of young men” bears testament to their resilience and determination to see last year’s championship through against all the odds. Like the Covid pandemic, there have been many false dawns but this week the giddiness will, no doubt, have returned in anticipation of Sunday’s delayed All-Ireland semi-final against Kerry at the LIT Gaelic grounds, Limerick, at 2.30 p.m..

In what is essentially a new championship, any momentum from the hard-earned Connacht championship triumph against Sligo on December 26th has evaporated. From a panel of 36 players, 11 had to concentrate on their Leaving Cert in June and eight are involved in this year’s U-17 panel who are preparing for a tough Connacht semi-final against Mayo later this month.

Throw in injury doubts surrounding Oisín Cregg, Aaron Shannon and Shane Walsh — the goalscorer from the Connacht final triumph against Sligo — and it’s not hard to feel a degree of sympathy for the management team of Durney, Karl Foley, Enda Daly and Dermot Lyons.

“It’s a bit like going into the Galway game last December. We weren’t 100 per cent sure of what we had because the whole thing had been so broken last year. So we could be every bit as good as Kerry or we could be a long way off. We just don’t know,” admitted Durney.

“But they’re the most remarkable group of young men. I can’t praise them enough for their dedication and their resilience. Maybe another group of lads that won a Connacht championship would be happy with that, but not these lads. They’re diligent, resilient and they’ve generally shown great characteristics — their attendance at training, their attention to training and to their own fitness.

“I’ve been involved with many Roscommon teams over the years, but these lads are different. They’re one of the four top minor teams in the country and they feel that there is more in it for them.

“When you get to that point, you give everything you possibly can. Opportunities like this don’t come along too often for Roscommon teams. When it finishes up, this group of lads, possibly, will never be together again. They get how close they are to something really special, and they’re doing what they need to do,” he explained.

Durney was keen to praise the contribution of his management, including Aaron Clogher, Shane McDermott and David McManus, who have left no stone unturned in getting the team prepared for Sunday’s stern challenge. The assistance from Athleague Hurling Club, especially Kevin McGeeney and Basil Jones, in providing a consistent training base for the team has also been of huge benefit to the side’s preparations since they returned to training in May.

“It’s huge that the game is happening, but I always felt that it would take place because the GAA has always, historically, finished out competitions. But we’ve been closed down from St. Stephen’s Day until May. The lads have worked fierce hard remotely, but things are different now.

“There’s no form coming into it. We’ve played three challenge matches as a warm-up. But you’re just giving lads game time to try and get them back up to speed,” the manager noted.

Kerry, who won their eighth Munster minor title on the trot last December, will be in a similar boat, not knowing how they’ll hit the ground running after such a sustained period of inertia. Players like captain Oisín Maunsell, Caolán Ó Conaill, Armin Heinrick and free-taker Cian McMahon will take watching, and Durney sees them as favourites for Sunday’s game.

“I wouldn’t have thought we’d be favourites going into the game. In any situation where you have an All-Ireland semi-final between Kerry and Roscommon, traditionally you’d struggle to make Roscommon favourites in any shape or form. But we’ll be competitive, and we’ll be prepared,” he vowed.

After such a strange championship, that’s all one can ask for.