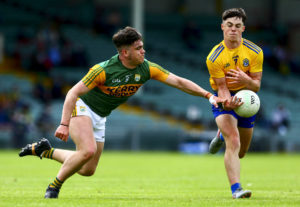 The 2020 Roscommon minor footballers fell at the penultimate hurdle in their quest for All-Ireland honours when they had to settle for second best in their delayed All-Ireland semi-final against Kerry at the LIT Gaelic grounds this afternoon.

Both teams hadn’t played a game in six and a half months but they made light of their inertia to produce a very enjoyable game of football. But Kerry had more class all over the field and ran out 3-21 to 2-13 winners.

Roscommon made a positive start with three unanswered points inside the first four minutes from captain Eoin Colleran (two frees) and Colm Neary.

But a brilliant team move finished to the net by Keith Evans seemed to ignite the Kingdom in the eighth minute.

Disaster struck for Emmet Durney’s charges just after the water break when a kickout from David Farrell was intercepted by Cian McMahon and he played in Darragh O’Sullivan who finished emphatically to the net. To rub further salt into Roscommon’s wounds, Aaron Shannon was shown a black card.

But Roscommon, to their credit, responded a goal by Ryan Conlon got them back on level terms.

The next seven points went Kerry’s way before Colleran stopped the rot to leave Roscommon trailing by 2-10 to 1-7 at the break.

Kerry kept Roscommon at arm’s length in the third quarter, with wing-forward Keith Evans continuing to impress, while Darren Gately never gave up the ghost for the Rossies.

A superb Conor Hand goal after the second-half water break brought Roscommon back to within six points but when Darragh O’Sullivan took a short free to Cian McMahon, the Dr Crokes player lashed the ball to the net to finish off Roscommon’s brave resistance.