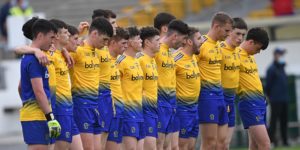 The Roscommon U-20 footballers before this evening’s Connacht semi-final at Dr. Hyde Park. Picture: Gerard O’Loughlin

The Roscommon U-20 footballers are back in the Connacht final following a hard-earned 4-13 to 2-12 triumph against Sligo in what was a hugely enjoyable contest at Dr. Hyde Park this evening.

Liam Tully’s side will play Mayo, who dethroned reigning champions Galway on Tuesday evening after a penalty shootout, in Elverys MacHale Park next Wednesday evening. However, despite another high-scoring display, a patchy second-half performance means that Roscommon will need to find plenty of improvement before next week’s decider.

Roscommon were 1-8 to 0-3 ahead at the break, thanks to James Fitzpatrick’s goal on the stroke of half time after Paddy Gavin’s effort for a point came back off the post, allowing the Oran forward scoop the ball over advancing Sligo goalkeeper Keelan Harte into the net.

In truth, it was no more than Roscommon deserved as they had dominated the opening half and missed at least three clearcut goal chances.

Daire Cregg (3), Ben O’Carroll (2), full-back and captain Colin Walsh, Fitzpatrick and Adam McDermott had found the range before Fitzpatrick’s opportunism pushed the hosts into a comfort zone that they were rarely rocked from for long periods.

Sligo were far more direct in the second half as Roscommon’s concentration levels slipped somewhat but the hosts always paraded that ability to get the scores up front, and when Keith Doyle sent Ronan Garvin galloping through on goal in the 37th minute, the Ballinameen player produced a contender for Goal of the Season with an emphatic finish.

Sligo began to profit from Roscommon mistakes and slackness that became more plentiful as the half wore on, and when their best player, Seán Carroll, found the back of the net with five minutes remaining to leave just four points between the sides, an air of nervousness invaded the Hyde.

But Roscommon struck for two goals inside a minute to put the game to bed. Firstly, substitute Jason Doory did brilliantly to find the net after shaping to pass the ball inside to the unmarked Fitzpatrick before Fitzpatrick grabbed his second goal of the evening after getting to possession before Harte and apply a finish that was very similar to his opening green flag.

There was still time for Joseph Keaney to score a spectacular goal for Sligo, but it wasn’t enough to prevent Roscommon from booking their place in what will be an eagerly-anticipated final against Mayo.

Ruaidhrí Fallon, Jack Lohan and Seán Trundle continued their rehab from recent injuries by seeing some game time, while Shane Cunnane was on the bench, as Liam Tully ascertained the strength-in-depth of his panel ahead of next week’s final.