Kay grasps opportunity of a lifetime 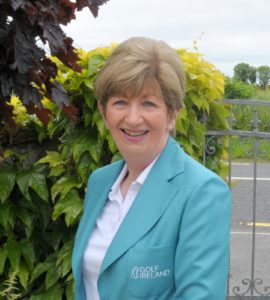 It’s easy to forget that over the past year and more, even as Covid-19 reduced society to a work-to-rule scenario, there were other subtle changes happening in the world of sport.

Founded in 1891, the Golfing Union of Ireland was the oldest national golfing union in the world. Two years later, the Irish Ladies Golfing Union (ILGU) was formed, also breaking new ground in the world of amateur women’s golf.

Despite having over 250 years of history between them, these two organisations ceased to exist at the end of 2020, as they were merged into Golf Ireland, a new organisation set out to promote equality and inclusivity in golf in Ireland.

This new organisation will oversee all golfing activity on the island of Ireland. John White, of County Armagh Golf Club, will forever be recorded in the history books as the first ever president of this new association and in 2022 he will be succeeded by Kay O’Loughlin from Castlerea Golf Club, who is currently serving as President-elect of Golf Ireland.

To those who follow the amateur golfing scene in the West of Ireland, particularly in Roscommon, Kay is a familiar face. She took up the sport with her husband Eamonn when his banking career took their family to the West Roscommon town. Kay credits the members of Castlerea Golf Club for bringing her into the world of volunteering where she held various committee roles over the years in the ladies’ committee — Lady Captain in 2006, management, fundraising and junior golf.

“When opportunity presents itself, you should go for it,” is how Kay describes her approach to this aspect of her life.

“In 2011 I was co-opted to the ILGU Connacht Regional Executive in order to head up a three-year regional training programme for junior girls in Connacht. The roles of ILGU Connacht District Chair of Handicapping and Connacht’s joint course rating team followed in 2015.

“In 2019, the Transition Board of Golf Ireland was set up and one of the first sub-committees was the Handicapping Committee for the WHS (world handicapping system).  Jim Mooney (Boyle Golf Club) and I were the two representatives from Connacht on this sub-committee, tasked with overseeing the roll out of the World Handicapping System for the Connacht region,” she recalled.

As was the case with the GUI and ILGU previously, the presidency of Golf Ireland is allocated to each of the four provinces in turn, and because of her ties with various parts of the province, Kay was an ideal candidate to represent the whole province in the role.

“It’s huge honour for me, my family, my club Castlerea and Roscommon to be President of Golf Ireland in 2022. I’m looking forward to the role immensely. Hopefully Covid-19 will be behind us, sport will have a full calendar of competitions and spectators once more.”

This year will certainly be a good apprenticeship for the President-elect, as the condensed nature of the calendar will put a huge amount of pressure on the time and energy of the elected officers. Due to necessity, Kay will find herself performing many of the functions that would normally fall under the duties of the President.

“My role this year is to support the President at competition events. Covid-19 delayed the roll out of so many competitions, so 2021 is an action-packed calendar with 71 championships — 58 regional and 13 national — as well as other notable events taking place. These include the Carey Cup at Carton House and the European Women’s Amateur Team Championship taking place this week at Royal County Down.”

Above all, Kay is keen to see the positive momentum that exists in the sport continue and gather speed under Golf Ireland.

“Golf is a wonderful social community. Golf clubs across the county have fantastic volunteer network. Volunteers are involved in all aspects of golf — the game, administration, course, coaching for both junior and adults. This is replicated right across the country, in every club.

“Golf has come a long way, the numbers playing golf continue to grow and that’s all thanks to the commitment of everyone involved at club level, supported by Golf Ireland Club Support Team.

“I think golf has grown within our communities. You look at Castlerea club, it has huge influence. It has over 60 juniors playing golf every Saturday and a junior girls programme on a Monday. We have three sessions of ‘Get into Golf’ and we are embracing everyone that comes through the doors.

“We have a fantastic volunteer network within the club, and they’re the ones that run these programmes. That’s apart from all the volunteers that are involved in all forms of golf administration, and Castlerea is not at all unique in this regard — this type of activity is replicated right across the country. Golf has come a long way and it is growing into the future and that’s all thanks to the commitment of everyone involved,” she explained.

For a perfect example of commitment to the betterment of the sport, one would struggle to find anyone better than the next president of Golf Ireland, and a proud representative of Castlerea and Roscommon, Kay O’Loughlin.