Poacher hits back at critics 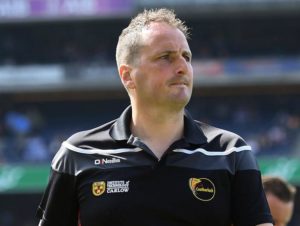 Roscommon senior football team coach Stephen Poacher has said that he will never doubt himself as a coach or a person on the basis of opinions offered by some high-profile GAA pundits.

Speaking to the Our Game podcast with Shane Stapleton, Poacher, who has drafted into the Roscommon set-up this year, labelled some of the criticism as “lazy” in the aftermath of the Rossies’ exit to Galway in the recent Connacht senior football semi-final.

“You listen to some of the cheap stuff that’s thrown out there, it’s just lazy. Mickey Harte was right when he talked about it — it’s the language that people use and the narrative they surround it with.

“On the day, Galway got over the line and they probably deserved it. They made less mistakes than we did,” he continued.

However, the Down native took issue with recent comments made by Pat Spillane and Colm O’Rourke, adding that their lack of experience at intercounty level made their opinions questionable.

“If you looked at the game between Derry and Donegal, I think Spillane spouted out something like ‘Derry have really taken the game to Donegal’. Derry dropped off on every single occasion and defended from the ’65.

“I would love to have seen the analysis of them saying ‘look at the match-up and the job that Chrissy McKaigue has done on Patrick McBrearty, look at the job Brendan Rodgers is doing only back from injury, the kickout strategy where Derry have made Shaun Patton kick under pressure and put two or three over the sideline’.

“That wasn’t even acknowledged, it was just ‘Derry have taken the game to Donegal’,

“Pat was unquestionably a fantastic player, but what are his credentials as a coach? He has never stepped forward, never been in the front line.

“That’s why I respect the likes of (former Roscommon manager Kevin) McStay and (former Kerry boss Eamonn) Fitzmaurice because they have been on the front line. They’ve been in the trenches, they understand what the game is about.

“Social media has become so toxic and so poisonous that anyone can have an opinion now. People can hide behind a computer screen and have a dig at people. They can hammer someone’s name. I think that’s wrong and it’s just a horrible part of our game.

“People say you put yourself out there and that’s fine. But those who have an opinion, I would say to them, come and see me coach, come and see what I do. I have done more for young people in Gaelic football that I could ever imagine. I’ve given 20 years of my life to promoting Gaelic games in my own county, in schools and in clubs,” he said.