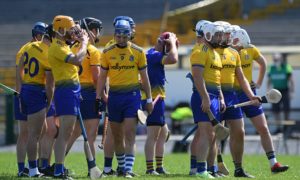 The Roscommon players get ready for this afternoon’s game in sweltering conditions at Dr. Hyde Park. Picture: Gerard O’Loughlin

Roscommon were knocked out of the Christy Ring Cup, and relegated to the Nicky Rackard Cup for 2022, in cruel circumstances when a goal in the seventh minute of injury time by Mark Hanniffy handed Sligo a dramatic 2-18 to 1-20 victory in sweltering conditions at Dr. Hyde Park.

A pulsating opening half ended with the hosts leading by 0-15 to 0-14, with Cathal Dolan leading the way with 0-7.

But the standard dipped spectacularly in the second half as both sides struggled in the intense 28c heat, although Roscommon senior footballer Niall Kilroy — making his first appearance for the hurlers this season — goaled early in the new half to give his side some momentum.

By the second water break, Sligo were back on level terms through Hanniffy before they lost James Weir to a straight red card.

When substitute Michael Brennan, with his first touch, and Cathal Kenny, who was Roscommon’s best player, added late points, Roscommon looked to have done enough.

But there was one last twist when Gerard O’Kelly Lynch’s free from 50 metres was deflected to the net by Hanniffy to rescue victory from the jaws of defeat for Sligo and leave Roscommon crestfallen at the final whistle.