Today at the Olympics: Tokyo 2020 belatedly gets under way 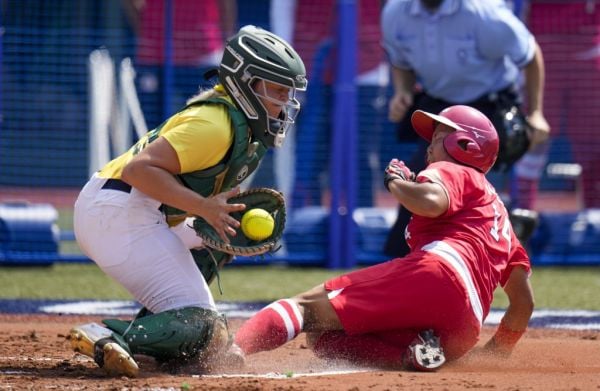 The rearranged Tokyo Olympics got under way in low-key fashion on Wednesday as Japan’s women’s softball team prevailed over Australia in Fukushima.

Coronavirus continues to cast a shadow over the Games, postponed by 12 months to this summer, and an opening event that was supposed to provide a boost to Fukushima a decade after its nuclear disaster was played in an empty arena.

But it was a winning start nonetheless for the hosts, who emerged 8-1 victors, as softball made its Olympic return for the first time since Beijing 2008. The sport is not on the roster for Paris 2024.

While the opening ceremony is not until Friday, both the softball and women’s football programmes began 48 hours earlier, the latter because of the sheer volume of fixtures.

Picture of the day

💪 Japan is off to a flying start at #Tokyo2020, after defeating Australia 8-1 in softball 🥎#UnitedByEmotion | #StrongerTogether | @WBSCsoftball pic.twitter.com/MGELymLbGe

The opposition to these Games among the Japanese public has been well publicised and while their fears should not be dismissed, they were given something to smile about as their women’s softball team easily defeated Australia. Minori Naito, Yamato Fujita and Yu Yamamoto all hit home runs for the hosts at the Fukushima Azuma Baseball Stadium, where the United States later edged out Italy 2-0 while Canada and Mexico face-off later on Wednesday.

Emotional to participate in the first pitch of #Softball opening the #Olympic Games @Tokyo2020 pic.twitter.com/2CrQZVY3Jf

A Chilean taekwondo player and a Dutch skateboarder have become the first athletes to be ruled out of the Tokyo 2020 Olympics after testing positive for coronavirus. Fernanda Aguirre, who was due to compete on Sunday in the same -57kg category as Jade Jones, posted two positive tests after arriving in Tokyo from Uzbekistan. Meanwhile 31-year-old Candy Jacobs, who was due to compete in the women’s street event on Monday, is also out after testing positive.