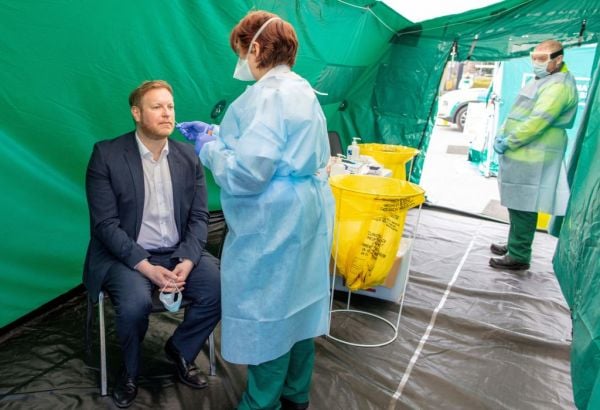 A Donegal Covid-19 test centre has seen a swab positivity rate of 28 per cent, which is one of the highest rates in the country.

Speaking to Newstalk, Dr Denis McCauley a GP from Buncrana said it was a “jaw-dropping” figure for his local area.

“Positivity rates, remember, could be 2.8 per cent nationally, we get very excited when they are about 9 per cent or 10 per cent but 25 per cent to 22 per cent is exceptionally high,” Dr McCauley said.

About 12 per cent of Covid-19 tests taken in Co Louth are coming back positive, which is the highest in the country.

The second highest swab positivity rate by centre is Tallaght Stadium at 23 per cent, followed by Castlesaunderson in Cavan, at 18 per cent, then Ardee in Louth and South Douglas in Cork, which both have a rate of 14 per cent.

Meanwhile, walk-in centres in Tullamore and Limerick also saw high positivity rates, at 22 per cent and 16.7 per cent respectively.

Dr McCauley is urging people to keep their guard up.

“If you’re going indoors, and there’s somebody in that grouping that has not been vaccinated, you should wear a mask because it is in these situations that the spread is particularly easy,” he said.

The five counties with the highest percentage of positive tests are Louth followed by Offaly, Donegal, Cavan and Monaghan

It comes as about 80 per cent of the population have finally received their first dose of a Covid-19 vaccine, three weeks after the initial target.

The latest figures from the HSE show that almost 5.5 million shots have been given out, with two-thirds of people fully vaccinated.

More than 65 per cent of vaccines administered have been Pfizer/Bio-N-Tech, while 22 per cent are AstraZeneca.

The head of the Health Service Executive (HSE) is warning the Delta variant remains a huge risk to the progress but believes the public can meet it head-on.

“Let’s aim to support our healthcare workers having a manageable August. One that they all deserve,” said Paul Reid.

We’ve over 5.34M vaccines administered with 66% of adults now fully vaccinated & 80% partially. Delta poses a huge risk to this progress but one that we can meet head on. Let’s aim to support our healthcare workers having a manageable August. One that they all deserve. @HSELive