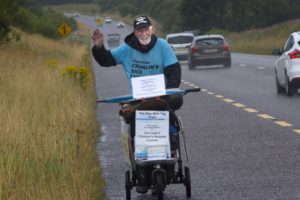 Eugene O’Leary walks on the N4 close to Boyle this afternoon as part of his fundraising efforts. Pic. Brian Farrell

Eugene O’Leary from Howth has been cycling and walking all over the world fundraising for charity since his daughter, a patient at Crumlin Children’s Hospital died in 2002. His cycles have included the Artic Circle, the Camino, the USA and South Africa. In those 19 years he has raised over €150,000. Eugene is currently pushing a buggy from Sligo to Dublin.
Pic Shows Eugene O’ Leary, crossing the Curlews on the N4 outside Boyle as he walks to Dublin fundraising for Crumlin Children’s Hospital. 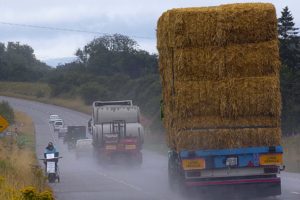