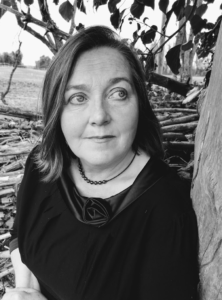 A South Roscommon author, Sheila Killian’s debut novel, ‘Something Bigger’, tells the story of an almost-forgotten incident in Irish-American history in which a brother and sister from South Roscommon found themselves in conflict with the KKK in Alabama, 100 years ago.

The novel is told from the perspective of Marcella Coyle, the grandaunt of the author, who emigrated alone from Drum, Athlone, to Birmingham, Alabama, at the age of only fourteen, to live with her brother Fr Jimmy Coyle. Though the novel is fiction, it centres on a famous marriage and murder in Birmingham.

The true story behind the novel is an incredible one, resulting in Sheila Killian’s granduncle paying the ultimate price for his convictions of racial equality. “Jimmy was an amazing man,” Sheila said, “in many ways far ahead of his time, with a real focus on human rights. I was fortunate enough to get the chance to visit Birmingham, Alabama, where he lived and died, a few years ago, and it really didn’t seem as though almost a hundred years had passed since he was there. People in bookshops and libraries knew his story. In the Birmingham Civil Rights Institute there are only two Irish men remembered. One is the infamous police chief who presided over the civil rights protests in the 1960s. The other, on the better side of history, is Jimmy.”

Speaking to the Herald, the former St Joseph’s College, Summerhill student said: “I grew up in Crancam, on the Drum Road, and my grandaunt Marcella came home to Ireland to live with us when I was a baby. She had lived in Alabama for 60 years and she was like a granny to me, we called her Auntie Sis.”

She recalled Marcella as a rarity in rural Ireland, an exotic person with her Southern drawl and American slang. She read stories and also spoke about her brother, whose picture hung proudly on the wall.

“Obviously everyone always speaks about Jimmy but I have always wondered about Marcella’s perspective. She went over when she was 14 and I often wonder what it must have been like to move from Drum in 1903/04 with quite a simple life to a bustling city.”

Fr Jimmy went to the US sometime before 1900, to Mobile Alabama initially before moving to Birmingham. He was gunned down on the porch of St Paul’s Rectory on August 11th, 1921.

“I gather that they kept the story from Jimmy’s mother, who was very frail at the time,” Sheila said. “But it was huge in Birmingham, it was one of the biggest funerals the city had ever seen. It was a huge event in the South.”

The novel has remarkable resonance today, as it shows how easily ordinary people can fall into far-right ideologies.

“Most white men in the South were in the klan at the time and they didn’t trust Catholics. They talked about them as not being real Americans, as being loyal to Rome. And there are parallels in how Muslims are spoken about today.”

A trained accountant and associate professor at the University of Limerick School of Business, Sheila is married to John Lannon from Cloonfad, Rooskey, and the couple has three children.

“I have always written through the years. I won the Molly Keane prize for Short Story writing and I published a few pieces of poetry. I also did a bit of travel writing for The Irish Times, but this is my first novel.”

‘Something Bigger ‘is literary fiction and is the result of years of work and research, with Sheila writing the prologue for it 15 years ago.

“The novel is completely fiction, even though it’s based, closely at times, on real events,” said Sheila. “I did a huge amount of research, but there comes a time when you move past that, and the characters take on their own lives. That’s what makes it work as a story, not just as history. It also needs to entertain, to make people feel something as well as make them think.”

The novel has already received glowing reviews from other Irish authors.

‘Something Bigger’ is described by author Niamh Boyce as “beautifully written and full of heart.”. Donal Ryan said “’Something Bigger’ is a stunning, intensely engaging novel by a consummate storyteller. It’s tense and gripping and beautifully written in restrained, elegant, crystalline prose. This is a book that I would eagerly recommend to any reader, anywhere”. Liz Nugent called it “compelling, intriguing and skillful”. Dan Mooney called it “a stunning reach into the past to explore moments we’re living through in the present”.

Sheila is already working on her second novel, which is set in recent times between the Midlands and Finland. ‘Something Bigger’ came out on July 20th, and all the places where you can order it are listed at www.sheilakillian.com/order.