It’s back – the Roscommon Herald SFC Team of the Week!

Yes, we’re back! Club championship football returned to playing fields all over the county across Friday, Saturday and Sunday gone by, and that means it’s time for the award that every player in the county dreams of when they lace up their boots – a place on the Roscommon Herald Team of the Week!

We’ll be back tomorrow with our intermediate championship selection, but to kick things off we’re going to start with senior, where ten of the 12 clubs were in action, with Michael Glaveys versus Elphin postponed to next Saturday evening due to heavy rain in Ballinlough.

Several keepers kept a clean sheet over the weekend but O’Reilly couldn’t be faulted for Ciarán Regan’s stunning shot to the top corner in Strokestown, so we won’t hold that against him.

What the Clann captain did was patrol the area close to goal very well, snapping up a couple of dangerous breaks, while his long restarts are quite the weapon for Liam Kearns’ side – as seen for the vital Ultan Harney goal at the end.

In an era where even your corner backs have to be able to play football and hold their own in attacking areas of the field, Cox is the ideal man to have lining out at 2 or 4. He got forward to chip in with a good early point against Roscommon Gaels and kept adding something to the Boyle attack, without ever neglecting his defensive duties.

Unsurprisingly, Oran dominate this team after pulling off the most eye-catching result of the weekend, and it’s no surprise that their stalwart full back was in typically stout form, holding his ground and policing the St. Brigid’s attack brilliantly.

Western Gaels will be hugely disappointed that they didn’t take the opportunity that Pearses gave them in a low scoring game at Woodmount, but it’s a testament to Conry and his fellow defenders that they stayed in the game throughout, despite going 28 minutes without scoring.

It should be noted here that Conry is being named on the left in this team even though he was deployed on the right by Fergal O’Donnell, in case questions are asked when we get as far as allocating the number 13 jersey later on!

There aren’t too many players in gaelic football anywhere, never mind in Roscommon, that can control a game from the wing back position – but Kenny comes as close to anyone. It felt like he was on the ball constantly in the Hyde on Friday night, operating as an erstwhile quarterback for Billy Donnellan’s side.

When the game was in the balance on Saturday afternoon, it was Pearses’ spiritual leader and stalwart in the number six jersey who stepped up and drove his team forward with a series of excellent plays that drew on his significant reserves of physical power, footballing intelligence and skill. Colin Walsh is probably a little unlucky to miss out, but on this occasion Daly’s contribution was much more significant – arguably the difference between winning and losing. 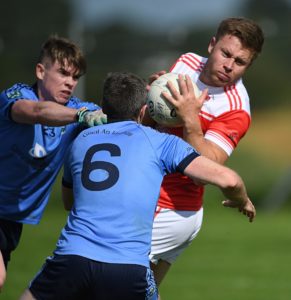 Left Half-Back: Ryan Galvin (Tulsk)The full forward line did the scoring but Galvin played as much football as anyone in Saturday’s mid-Roscommon derby against St. Croan’s at the Hyde. He drives forward well, he looks after his defensive duties, and has become a real leader in a quite young team.

Keenan is the more solid, defensive player of the Oran midfield duo and he looked after that side of his business very well and still chipped in with two points in their win over St. Brigid’s. Brian Stack was arguably Roscommon’s best player this year while the return of Garvan Dolan was supposed to further boost the champions’ title credentials – those two were completely outplayed by the Oran duo in the middle.

Oddly, Lawless didn’t raise a white flag against St. Brigid’s, but he did nearly everything else. His movement off the ball, his powerful running when in possession and his clever use of that possession was top class, and on this form he’s another player that will definitely be watched closely by Anthony Cunningham over the next few weeks.

Last year, there was no player that was selected on our ‘Team of the Week’ more often than Walsh, and he picked up right where he left off in this game. He was imperious, on a par with Ciarán Lennon and Niall Daly for the best performance of the weekend overall. Right half-forward is completely wrong in terms of bearing little relation to where he played, but it’s a testament to Walsh that we choose him here, as there is a sense that he could play anywhere on a team, certainly from wing back up. 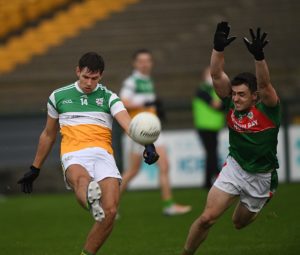 He wasn’t better than Walsh, but there’s no doubt that Clann would have left Strokestown empty-handed if it wasn’t for the efforts of their number eleven. When they were struggling badly in the first half, he kicked a good point in traffic to get them going. He won any amount of dirty ball, and of course popped up with the vital goal at the end. One point down in stoppage time, bearing down on goal, there’s plenty of players that would have played it safe and punched the ball over the bar. Harney backed himself, and kept his nerve to make sure of the win.

As senior debuts go, it’s hard to imagine a better first appearance for your club than scoring 1-3 in a comprehensive victory over another championship contender. Cregg took his county U-20 form and brought it back home to the Abbey Park, outshining several of his more established club colleagues in the process. Boyle’s stock is soaring now that they’ve got this young man back in a maroon (or white!) jersey after his long injury absence.

Now it becomes clear why we had to make it clear that Séan Conry was playing at 2 as opposed to 4, since Kelly was top of the right for Pearses and he was in clinical form, scoring a decisive goal and adding three more points along with it. Coming into 2021, much of the questions around Pearses centred on if players like Hubert Darcy, Conor Payne and Paul Carey would become the type of leaders up front that the club needed. Payne was the best of the three on Saturday but they were all outshone by Kelly.

Last year, Lennon had to learn to play as the main man in the Clann attack, due to Donie Shine’s injury issues. Now, he’s not alone the main man for his club but he’s arguably the form forward in the county. Some of his points in Strokestown were right out of the top drawer, and all when the home side knew he was the only attacking threat they had to curtail.

While his team was down to fourteen players he was starved of possession and went out of it, but as long as the ball was going in, McGann was winning it and using it well. In his entire senior career, it’s debatable whether the Strokestown captain has ever been as sharp or as well-conditioned as he looked in this game.