Roscommon IFC round one Team of the Week

While the 2021 Roscommon senior football championship got underway at the weekend, there were also six games played at intermediate level, where 12 clubs began the race to lift the Jamesie Murray Cup and to move up to the top tier for 2022.

There’s a long way to go before we learn who will succeed Oran as the county intermediate champions, but Fuerty, St. Dominic’s and St. Faithleach’s all took steps in the right direction and they will continue to be the market leaders.

Full reports on all six games are available in this week’s edition of the Roscommon Herald, which landed in shops today, but it’s only online where you’ll find the definitive Roscommon Teams of the week. Yesterday we gave you the 15 stars of the senior championship, now here’s the 15 standout figures from the first round of the Mulryan Construction IFC.

Saturday evening’s contest in Ballyforan was forgettable fare for the most part, particularly in the second half where both sides scored a mere two points each. Ballinameen had goal chances however, and on a couple of occasions St. Aidan’s needed their veteran goalkeeper to bail them out of trouble, which he did.

All over the field, St. Dominic’s were a class apart from Kilmore so we could have picked out any of half a dozen of Tomás Gilleran’s players for selection. Séan Kenny does make the cut after a typically efficient and classy performance, albeit in a full back line that wasn’t put under a huge amount of pressure at Dr. Hyde Park.

For long stretches of the game in Oran, Cox didn’t stand out – but he was doing his job very well and making sure that his goalkeeper wasn’t tested at any stage. A goal for Éire Óg could have completely changed that game, but the Loughglynn club never looked like getting past the resolute St. Faithleach’s full back.

Not unlike the other two selections in the full back line, it was a case of mind the house and steady as she goes for Dowd, who held a tidy forward in Séan Carty scoreless from open play. Dowd lined out at full back, a position we’d expect him to hold all year, but performed to a level where we were happy to accommodate him out of position in order to ensure his inclusion. 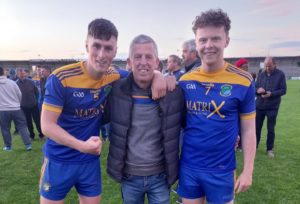 Kilbride’s poor run of results from 2020 and 2021 continued on Sunday in Johnstown, but while it’s been nine defeats in ten competitive games for the mid-Roscommon club now, they continue to pose a real attacking threat. Kieran Connaughton (pictured above left) was a leading defensive light for the home side, while also getting forward to play a key role in a couple of Clann scores.

The Loughglynn club controlled the middle for long stretches of their game against St. Faithleach’s, and their all-action centre back was at the heart of that. Barron was strong in the tackle, sharp on breaks and good on the ball in a dominant display from start to finish.

Fuerty’s full back line had their hands full on Saturday evening at O’Rourke Park, but they were a lot stronger further out the field, and at half back in particular, the trio of Philip Neilan, Peter Kellehan and Eamon Bannon laid the foundation for victory. Bannon in particular picked up a couple of crucial turnovers that proved to be significant in a contest that ended with just two points between the sides.

The Kilbride club have an outstanding tradition of producing powerful fielding midfielders down the years, and while it’s a bit early to say that they have another Seamus O’Neill or Stephen Lohan on their hands, Merriman’s performance on Sunday had shades of those men about it – ferociously strong and imposing under a high ball, and physically dominant between the 65s generally.

Appleby was one of the most improved players in the county in 2020 and he continues to come on in leaps and bounds, having only taken up the sport of gaelic football in his late teens. As his game awareness and understanding grows, he becomes more and more integral to a very talented St. Dominic’s group. 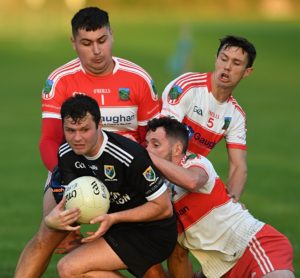 Again, we’re taking a bit of a positional liberty here as the Roscommon intercounty forward was named at centre forward but lined out at top of the left against Éire Óg. He did drop deep however and was centrally involved in the game, not to mention chipping in with three vital second half points from play to keep the opposition at bay in a tight game. Of the four “inside forwards” that played well enough to make their inclusion essential, Murtagh would be the easy option to play as a wing forward instead if this team was being picked for real!

Seven points overall, four from play, and exerting a huge influence on general play as well – Keenan was arguably the best performer of the weekend in this championship overall, or at least in the top two alongside Niall Kilroy. Last year Darragh Walsh seemed to be a permanent fixture at centre forward in our weekly selections for the Intermediate team of the week, Keenan could very well do the same this year.

It’s extremely rare to see Murtagh put in anything less than a seven out of ten performance, and eight or nine would be his mark for a typically energetic and wholehearted showing against Creggs. On and off the ball, he did the right things and did them with intent and vigour, not to mention chipping in with a fine score.

It’s hard to look past any forward that scores a hat-trick, even if the result goes against his club. Like any good inside forward, McDermott is able to come through long spells where the ball doesn’t come his way and still be sharp and clinical when he’s given the chance to make an impact. Hugh Rooney’s red card also meant that there was a lot of work demanded of the remaining Castlerea outfield players, and the county U-20 star didn’t shirk anything on that front either.

Eight points (one from a mark and seven from play) scored while still putting in tackles, competing for bad ball and bringing his colleagues into the game – Kilroy remains one of the most consistent performers in the county at every aspect of the game. Johnny Coyne put a dismal few years of injury heartache behind him with two well-taken goals against Ballinameen and on another week, the St. Aidan’s man might have got the nod here, but Kilroy just made it impossible to consider any alternative.

Ger Dowd might have lost one very talented forward when his son Ronan chose to move to London earlier this year, but he has a real livewire on his hands in the shape of the 2020 Roscommon minor star. A goal and a point crowned a very lively overall display, where he combined incredibly well with his full forward line colleagues Kevin Gavin and Noel Gately.