A festival of full backs – it’s the Roscommon Herald IFC Team of the Week!

The race for the intermediate championship in Roscommon had a couple of fallers at the weekend as Ballinameen and Shannon Gaels both slipped into relegation playoffs on the back of their defeat, while Clann na nGael, St. Dominic’s and Fuerty remain the front runners with back-to-back victories. Éire Óg remain the unluckiest team in the competition with no points from two excellent performances, and all we can do is offer them some crumb of consolation with two slots in the Roscommon Herald IFC team of the week!

The young goalkeeper, who shares his name with the lead singer and creator of the Divine Comedy, gave his club Something for the Weekend when he produced a couple of really good saves to preserve their early lead against St. Aidan’s at Kiltoom.

There are bigger goalkeepers out there, but he was still extremely brave when he had to be for some dangerous incidents.

We’re taking more positional liberties than usual in this team, and one of which is shunting Ward out to corner back, even though he played on the edge of the square. On his current form, you’d be delighted to have Ward anywhere in any club backline, as he is putting in some superb man marking performances.

Johnny Coyne was the main attacking threat on the St. Aidan’s side but he struggled to get any change out of the big Clann full-back, who was as powerful as you’d expect in physical contests and yet sharp when he needed to be on the ground.

Another man who lined out at full back, but who could easily do a job anywhere across the back six. Shannon Gaels didn’t offer much by way of attacking threat but Keane stepped up his game well, winning some good turnover ball and carrying it forward extremely effectively. 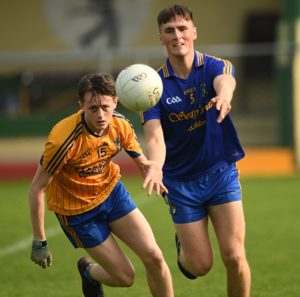 Kieran Connaughton of Clann na nGael is the only man to hold his place on this Team of the Week from a fortnight ago.

Just one player – Ciarán Lawless of Oran – retained his position across the first two senior Team of the Week selections, and at intermediate level, Kieran Connaughton is the only player to do so. A late goal crowned a fantastic all-action performance from the wing back.

His late goal was a game changer, but throughout the game in Knockcroghery last Saturday McCormack was a dominant influence in stemming the Éire Óg tide. If Tomás Gilleran’s side are to make the breakthrough this year and get back up to playing senior football, they’ll lean heavily on players like McCormack on the way.

On and off the ball, in defence and in attack, Hester was constantly involved in that rip-roaring game at Knockcroghery, and he’s part of a young cohort of players in Loughglynn that look like they can bring about a very bright future for the club.

Not unlike Eoin McCormack on this selection, or indeed Tim Lambe yesterday, his goal caught the eye and it crowned a very solid performance over the course of the hour’s play. Hester is the perfect modern midfielder – able to get up and win his own high catches, but also a very mobile, very athletic ball player that can contribute at both ends of the field.

Rooney was unlucky to miss out in week one after kicking three points in a decent overall display, and if we were to leave him out again after he yet again posted 0-3 from play while playing at midfield, he might suspect a conspiracy. Far from it, as the St. Faithleach’s man was full value for his selection here.

Much like in the full back line, where we chose three full backs across the three positions, we also had two outstanding centre forwards so Kilbride’s star man gets switched out to 10, with our natural ten moving into the corner. Having scored 2-4 and run the Ballinameen defence ragged every time he took possession, Clabby was one of the best players of the weekend and will be earmarked as a key threat next Sunday when they try and avenge their 2020 defeat to St. Aidan’s.

Séa Henry marked an excellent player in Keith Waldron of St. Aidan’s and still dominated the clash between the two South Roscommon clubs.

Anyone in Kiltoom on Saturday saw an absolute tour de force from the Clann centre forward, who ran hard and at pace at the St. Aidan’s defence and was centrally involved in a huge number of scores, not to mention kicking three highlight reel points of his own. If Liam Kearns can go the full year without calling on him, it will speak volumes for the strength in depth there is in Johnstown at the moment.

Murray has been switched up to the forward division this year, having played as both a sweeper and as a wing back in his short adult career so far, and he put in probably his best ever performance against the neighbours from Creggs on Saturday, picking up two goals as well as getting back to put in a lot of covering tackles.

One point might not seem like a lot for a forward to score in a team that registers 2-16, but Hurley was a big part of why St. Dominic’s were in a position to strike late and pick up the win against Éire Óg. The dual player is an elusive runner with quick hands, capable of subtly opening up a packed defence in a split second. 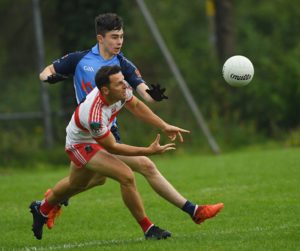 Diarmuid Murtagh scored 0-5 (one free) against Kilmore on Saturday.

A quiet performance in the first round of games might have been cause for concern around Ballyleague, but the Roscommon county man burst back to life against Kilmore, shooting 0-5, four from play, and coming close to rattling a couple of goals as well. Things will get a lot tougher for him against St. Dominic’s next week, but he’ll feel very good about his form this week as he prepares for that contest.

Much like Diarmuid Murtagh, Cox struggled to make a mark on the first round game between Éire Óg and St. Faithleach’s at Rockfield, but he was on fire in Knockcroghery, firing over nine points, five from play. His style of play is very simple – show for the ball, use his power and strength to engineer space to shoot, and then hit the target. The approach is no less effective because of it’s simplicity however!