Mayo to be rewarded for hanging on in quiet desperation 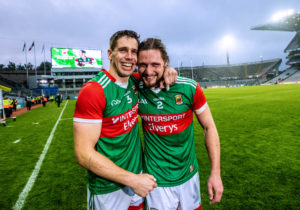 Will Lee Keegan and Padraig O’Hora be celebrating on Saturday evening?

Unlike England at the Euro 2020 final, Mayo are primed to put past disappointments to bed, writes KEVIN EGAN…

It’s only fair to open this piece with fair warning for any Roscommon Herald readers with Mayo roots, Mayo connections, or Mayo sympathies. Two statements are about to follow, both of which will be very difficult to read, albeit for very different reasons.

The first will inspire anger, bordering on apoplectic rage, while the second will lead to a queasy, uneasy sense of foreboding and doom. Yet from this neutral perspective (if any Roscommon perspective could ever be considered neutral when Mayo are involved), both feel unequivocally true.

First, we shall provoke ire.

To a lot of people all across Ireland, and particularly to those that live somewhere close to the Mayo border in places like North Galway or West Roscommon, the Mayo footballers this Saturday will be watched in much the same way as we watched the England footballers in the Euro 2020 final.

On an individual level, the players involved in both England and Mayo are good, committed human beings, who have been through a lot of heartache and hard luck stories, and who deserve the breaks to fall their way for once. Maybe not Declan Rice, but the rest of them, absolutely.

On a collective level, we’d like to be above the petty local rivalry thing, but the prospect of what the world would be like after a Mayo/England win is somewhat scary. It’s easier to avoid the Western People and Midwest Radio than the BBC, but the hype would still spill over a lot.

Also, the ongoing occupation of a particular territory, whether that’s Ballaghaderreen or the six counties, doesn’t help. Admittedly, not even the idea of Pee Flynn celebrating in his three houses is as scary as the thought of Boris Johnson wearing an England jersey over a shirt and tie, but it’s still troubling and unpleasant to contemplate it.

And for good measure, could we imagine someone like Ronan McNamee playing the role of Georgio Chiellini on Sunday, and breaking Mayo hearts with some dastardly cynical play? It’s almost hard to imagine anything else. So yeah, for a couple of hours this Saturday evening, Mayo are England.

However now, it’s time to write our second statement — something that Mayo supporters will really hate to read, or even to think about, until the final whistle goes at about 6.40 p.m. this Saturday evening.

Unlike England, Mayo are going to win.

That may seem a very simplistic summary of a very complex game of football with a lot of moving parts that could interact with each other in so many different ways. Yet the more we look at this game from a footballing perspective, the more the analysis, like the needle on a compass, keeps pointing the same way.

Both Mayo and Tyrone were shock winners of their semi-finals, but there was one massive difference between the two games. If Dublin had somehow scrambled a late goal against Mayo and forced a replay, people would have walked away from the game saying that Mayo were a match for Dublin, football wise, and that only their tragic history (or tragi-comic, depending on your perspective) would deny them the win.

If Tommy Walsh’s late shot had gone over the bar and Tyrone had to play Kerry all over again, we’d say that Kerry would never be as naïve a second time, that Kerry would never mess up so many goal chances a second time, that the fortunate bounces that led to Cathal McShane and Conor McKenna’s goals (not the first of the game, but the other two) would never run so kindly again. Kerry were 1/7 to beat Tyrone on day one, they’d have been 1/10 on day two.

Tyrone planned out their semi-final very well, but they also got every break going, and needed it. Mayo didn’t get any huge slice of luck, but they won anyway.

Moreover, Tyrone’s approach was ideally suited to taking on Kerry. The Kingdom went to battle with two proven star forwards, and four other attackers who were capable of brilliance, but also unproven in the red-hot cauldron that is Croke Park on a big championship afternoon.

Tyrone’s ferocious man-marking approach was unable to curb David Clifford, while Seán O’Shea also had a good day, but every other Kerry forward was shackled. Yet that Tyrone approach is not at all suited to taking on a Mayo team that gets scores from all over the field, a team that is relentless in their running, a team that doesn’t depend on any one or two players to carry the scoring load.

Kerry’s defence was completely unproven, and was believed to have a soft underbelly. Mayo just held Dublin to 0-4 in just under an hour of championship football. Okay there was no Paul Mannion, and there was no Jack McCaffrey — this wasn’t the Dublin of Jim Gavin, but it wasn’t a bad team all of a sudden either, and Mayo starved them.

Kerry did well on their kickout, but they didn’t know how to use the ball once they won it, having played a series of naïve Munster teams up to this point, so they ran down the channels that Tyrone opened for them, and paid the price. Mayo are far more experienced, far more astute, and they won’t play into Tyrone’s hands by charging forward and leaving themselves vulnerable to counter attacks.

Kerry had no answer to the physical power and presence of Cathal McShane. Oisín Mullin, or if he doesn’t make it, Pádraig O’Hora, will relish that challenge. The footballing reasons why Mayo will win just keep coming.

Of course, there are all the incorporeal reasons why Mayo might not win — white line fever, the curse of 1951, and all the other pishrógs and plagues that have afflicted the rhubarbs for seven decades. Yet for years, there are countless games that Mayo might have won or could have won, but didn’t because of one piece of ill-fortune or another. It’s a lot harder to find examples of games where they should have won, where they were clearly the better team, but they failed to deliver.

Luck can easily turn a two-point win into a one-point defeat, or vice versa, but, sometimes, the gap is too wide for luck to bridge, and this game could offer such a gap.

It could have been England.