Can Strokestown deliver another big performance? 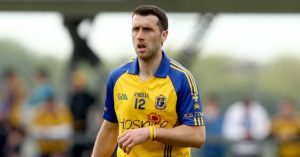 With the top and bottom placings decided in Section A of the Roscommon Senior Football Championship, the key game is between Padraig Pearses and Strokestown later this evening to see who qualifies directly for the knockout stages…

Convincing his players that this “dead rubber” is actually hugely important to Western Gaels’ season will be Fergal O’Donnell’s biggest challenge this week.

There will have been plenty of head scratching around Frenchpark, Ballinagare and Faitymount after blowing a seven-point lead early in the second half against Strokestown. But Western Gaels have been down this road before, and the search for answers always procures the same conclusion — they don’t have the depth in their panel to break their Fahey Cup duck.

That wait will continue in light of Western Gaels’ doomed position in the group. All they have to play for is pride this evening. But that’s important in the context of what is to follow in their relegation play-off just around the corner.

For Clann na nGael, this is all about being professional and continuing where they left off against Padraig Pearses seven days earlier.

Ultan Harney is likely to be given the evening off to give him more time to recover from a knee injury he picked up against Strokestown.

Liam Kearns will have been delighted with the way his team performed against Pearses. What he doesn’t want is a slackening off in standards just because Clann know they will be top dogs in the group.

Clann to win — the margin of victory will be dictated by the mood they’re in.

Pat Flanagan and his Pearses players will have heard talk about his players becoming stale, so here’s the chance to set the record straight.

But they were second best in most departments against Clann na nGael, and it won’t be easy to rediscover their best form against a resurgent Strokestown side.

It’s not hard to identify where the problems are for Pat Flanagan and his selectors – across the 24 SFC and IFC teams, only four (St. Croan’s, Elphin, Kilmore and Ballinameen) have scored less than Pearses.

Now they must take on a Strokestown side who’ve just recorded what was arguably the best result for the club in senior championship for several years. There was a lot to like about the way John Rogers’ side dismantled Western Gaels when they found themselves in a spot of bother.

With Cathal Compton a pivotal focal point in attack, the leadership of Diarmuid McGann, Seán Mullooly, Paddy Brogan, Kevin Finn and David Neary will be priceless in a game like this.

In the knowledge that they should have beaten Clann na nGael alongside the manner of their victory against Western Gaels, Strokestown are well entitled to believe that second place in the group can be theirs later this evening, leaving Pearses possibly in a play-off to make the knockout stages.