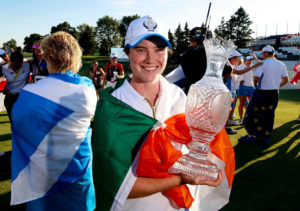 Leona Maguire’s exploits at the Solheim Cup last weekend have captured the imagination of the sporting world, no more so than in Castlerea Golf Club where Leona and her twin sister Lisa are honorary members.

Leona’s aunt, Mary Colleary (nee McGovern) was Lady Captain of the West Roscommon club in 2011, having moved to the town with her husband Muireadach to teach in Castlerea Community School 25 years ago.

“We moved to Castlerea in the 1990s. My sister Breda is Leona’s mother, and we come from Bawnboy, County Cavan,” Mary told the Herald.

“Leona was always a gentle, reserved, quiet young girl. When it came to sport, especially golf, she was, and still is, passionate with a competitive fire in her belly, believing that, one day, she would be the number one lady golfer in the world.

“At home, she is no different than any young lady. When we visit, she is full of fun and craic. She’s always open to a good chat on any topic — from sport to the crisis in Afghanistan, fashion and music,” she continued.

A crowd of young and seasoned golfers gathered in Castlerea to see the then-teen golfing sensations in the club in what was a red-letter day in the proud club’s 106-year history.

“Leona and Lisa were just 16 at the time. They were taking the ladies’ golfing world by storm. They were numbers one and two in the European Amateur rankings,” Mary recalled.

“It was a special privilege for me that they agreed to share the day with us in Castlerea. There was huge excitement around the place.

“The club saw this as an opportunity to celebrate the girls’ talents and they invited anyone with an interest in sporting excellence to come along. Admission was free, although visitors were invited to contribute to an off-course collection for MS Ireland,” she continued. 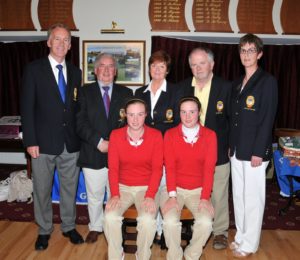 The sun shone brightly as the Maguire siblings began the day with a skills session, each taking a selected group of the club’s junior golfers, boys and girls, through the finer points of the game. They went on to play an 18-hole exhibition match, which was followed by a huge gallery.

Afterwards, the girls signed autographs in the clubhouse. They were also interviewed by former Mid West Radio Sports Editor, Angelina McHugh, as they shared their insights about their teenage lives, the demands of golf and what the future might hold.

Now ranked 32nd in the world, Leona’s appearance for Ireland at recent Olympic Games was soon followed by her all-conquering performance at the Solheim Cup where, in her first appearance, she was Europe’s outstanding player.

However, Leona has always maintained a keen interest in the development of the junior game in Castlerea.

“She’s always asking how the younger players are getting on. This year, the senior girls will play their final competition for 2021 for a sleeve of Titleist Pro V1 golf balls signed by Leona,” outlined Mary.

With a popular family connection and memories of a wonderful day at the club ten years ago, no wonder the people of Castlerea Golf Club have taken Leona Maguire to their hearts.

In their eyes, she’s one of their own.