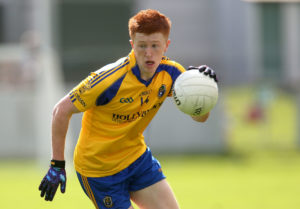 Diarmuid McGann was one of Strokestown’s key players this evening.

Strokestown confirmed their place in the quarter-finals of this year’s senior football championship when Diarmuid McGann’s free in the fourth minute of injury time rescued a draw against Padraig Pearses in Kiltoom this evening.

Once again, John Rogers’ men responded to adversity as, despite losing Fionn Cusack to a yellow and black card, they kicked the last two points of the contest to make it 0-11 apiece at the full-time whistle.

As a result, the ‘Town have qualified for the last eight on scoring difference, while Pearses must await their fate in this weekend’s draw to see if they go directly into the knockout stages or face a play-off.

The 2019 champions started like an express train, kicking the first three points but Strokestown had edged ahead, 0-7 to 0-6, at the break.

When David Murray was content to take his point late on to make it 0-11 to 0-9 in Pearses’ favour, they were the better bet for victory but late frees from Kevin Finn and McGann, who was excellent once more for his side, earned Strokestown a deserved draw.

The other game in group also ended in stalemate as Western Gaels earned a credible draw, 1-10 apiece, against Clann na nGael at Ballyforan.

With Man of the Match Finbarr Cregg and substitute Tommy Gill standing out from the crowd, Fergal O’Donnell’s men were on the cusp of a morale-boosting victory until a late point from Clann full-back Stephen Flynn, which came from a long delivery that evaded everyone to bounce over the crossbar, earned a draw for his side who made too many unforced errors over the hour.

Clann were 1-6 to 1-5 ahead at the break — Ciaran Lennon and Luke Hester being the goalscorers for their respective sides.

The result didn’t alter the standings in the group with Clann topping the table, while Western Gaels must prepare for a relegation play-off.