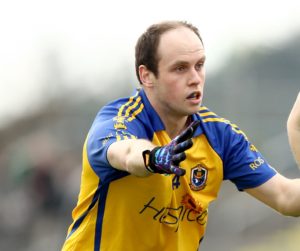 Seamus Stenson’s early goal set up Castlerea St. Kevin’s for a tilt at this season’s intermediate football championship quarter-finals as the West Roscommon club eked out a 1-10 to 0-9 victory against Creggs at Enfield this afternoon.

Stenson reacted quickest to a blocked Ronan Raftery effort to find the net in the second minute and Castlerea duly held on for victory, despite stiff resistance from a gallant Creggs side that ran out of ideas in the second half.

Darren McDermott and Jack Keane impressed for the winners, while Joel McPhilbin, Tomás Crean and Mark Dowd did well for Ger Dowd’s side.

Creggs were level by the 43rd minute but Castlerea kicked the last four points of the contest through Darren McDermott, Adam McDermott (free), substitute Ja Geraghty and Keane to confirm their victory.

Fuerty topped the group with a 3-10 to 1-10 victory against Shannon Gaels at Dr. Hyde Park.

Stephen Glennon’s side pounced for their hat-trick of goals inside the first 14 minutes, with a couple of Jack McGahon green flags and another from Aengus Lyons.

Shannon Gaels battled back bravely but Fuerty’s bright opening had done the damage.