SUPER SUNDAY: All to play for in final round of the local football championships 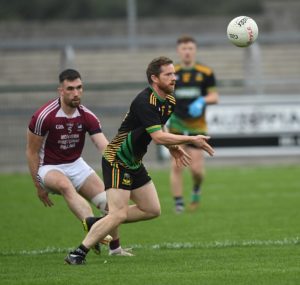 Can Stuart Daly and his Michael Glaveys team-mates top Section B of this year’s senior football championship?

There are eight games down for decision in the final round of the senior and intermediate football championships on Sunday. Which teams will make their mark? Here’s the Roscommon Herald’s guide to how the various sections stand…

Boyle stand in the dock, accused of being a team with a forward division capable of testing any defence, and a defence capable of opening doors for any opposition. Elphin probably don’t have the scoring power to really exploit that vulnerability, even on home soil, so by Sunday afternoon it’s likely that Cian Smith’s side will have got their season back on track.

Elphin still aren’t out of the championship reckoning, in the sense that they need to beat Boyle and hope for a positive result for Roscommon Gaels against Michael Glaveys. Neither ingredient looks like it will be easily delivered.

For Michael Glaveys to have two wins out of two games, given the key players that have been missing from their team, is very impressive, and they will fancy their chances of wrapping up top spot in the group and “seeded” status for the quarter-finals.

Not unlike Elphin, St. Croan’s can still get out of the bottom spot in the group if they win their game and the other game in the group goes well for the home team.

Not even the most passionate and fervent St. Croan’s warriors will believe that’s possible right now, following their dismal showing in Rockfield on Sunday last. Steadying the ship and getting something positive to hold onto in advance of the relegation play-offs would be more than enough to keep Eamon Towey happy this week.

The other game looks like it could be a very interesting one, albeit Tulsk probably don’t quite have the firepower to live with a red-hot Oran team.

The last club in Roscommon to win promotion to senior level and then win the elite championship at the first attempt was St. Brigid’s, who won the county junior championship in 1952 and then added the first of 17 senior crowns a year later.

Oran should be thinking in the same terms right now.

After a dreadful run of defeats in league and championship across 2020 and 2021, broken only by a relegation final victory over St. Barry’s, Kilbride finally found some positive form against Ballinameen on Friday week last, while St. Aidan’s were some way off the pace against Clann na nGael in Kiltoom.

The South Roscommon side were noticeably better when they got their dual players on the field by the end so they’ll be better again on Sunday, though home advantage and the lifting of a heavy weight from Kilbride shoulders might tip the scales in favour of the boys in green.

Just pride is on offer for Ballinameen against Clann na nGael, and keeping the final margin to seven or eight points would be a positive step forward for them. It won’t be easily done, however.

Éire Óg won’t forget 2020, when they burst out of the blocks with a huge win over Castlerea and then promptly were undone by Kilmore next time out. This year they don’t have wins behind them, but they have put up two excellent performances and they look like they’ll make for a very tough draw for some seeded team in the quarter-finals, if they can keep their concentration against a badly misfiring Kilmore group.

When the final whistle sounded at the end of last year’s intermediate semi-final, the feeling in St. Faithleach’s was that the early injury to Diarmuid Murtagh was a huge reason why they lost to St. Dominic’s. They have a chance to prove that at home on Sunday in a game which will teach us a lot about who’s best poised to move up to senior football in 2022.