Boyle and Oran top their groups 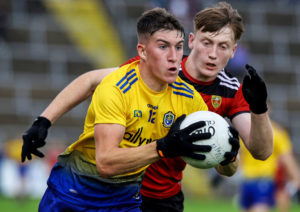 Boyle and Oran will be seeded for the quarter-final draw in this year’s Roscommon Senior Football Championship after topping their respective groups with victories this afternoon. Following this evening’s draw, reigning champions St. Brigid’s, despite finishing in second place in their group, will also be seeded in the draw.

Boyle came good in the final quarter to see off Elphin’s challenge on a scoreline of 1-13 to 2-7 at Orchard Park.

Early goals from Aidan Murray and Alex Gleeson put Elphin in the box seat as they led by 2-4 to 0-7 at half time. Basil Mannion’s side were still in front, 2-6 to 0-10, at the second-half water break and there was a danger of Boyle exiting the competition if results didn’t go their way elsewhere.

But Cian Smith’s charged rallied to take care of their own business, with Daire Cregg’s goal turning the tide in their favour with eight minutes remaining.

Roscommon Gaels finished third in Group B on scoring difference, despite getting the better of Michael Glaveys, 3-4 to 1-8, in a poor game at Lisnamult.

Brian Kelly’s 18th minute goal gave a depleted Gaels side the initiative. Glaveys didn’t score until the 27th minute but Darragh Heneghan’s goal two minutes later hauled them back into contention. However, Mark Healy finished off a good move just before the break to hand his side a 2-3 to 1-2 advantage at the interval.

John McManus’ fortuitous 33rd minute goal gave Gaels an even bigger cushion, and despite losing Mark Purcell to a straight red card they held on against a Glaveys side that missed too many changes during a second half that lacked quality.

Oran’s fairytale return to the senior ranks continued when they saw off Tulsk on a scoreline of 1-14 to 1-8 in Tulsk to confirm top spot in Group C.

Billy Donnellan’s side were 1-6 to 1-2 ahead at the break, with James Fitzpatrick and Daniel Connolly finding the net for their respective sides, and they duly kept their opponents at arm’s length in the second half to prevail.

The other game in the group saw St. Brigid’s cruise to a 1-18 to 0-6 victory against St. Croan’s at Enfield.

Brian Stack’s first-half goal helped push his side into a 1-8 to 0-2 advantage at the break. Ben O’Carroll ended the game with 0-8, including five points from play. However, the best news from a Brigid’s perspective was the sight of influential midfielder Eddie Nolan returning to the fray with ten minutes remaining.

The relegation play-off draw will see Western Gaels play Elphin, with the loser to play St. Croan’s to see who make the drop to the intermediate football championship in 2022.

Kilbride’s better scoring difference allowed them to sneak past St. Aidan’s into the intermediate football championship quarter-finals from Group B as the sides played out an exciting 2-11 apiece draw in Kilbride.

All the goals came in the first half with Andy Higgins and Adam Cummins finding the net for St. Aidan’s while Darren Clabby and Alan Merriman did likewise for Kilbride, who found themselves a point behind, 2-4 to 2-3, at half time.

Kilbride were 2-10 to 2-7 ahead immediately after the water break but a couple of late scores from Cathal Dolan and Johnny Coyne rescued a point for St. Aidan’s.

There was high drama in Ballinameen as James Tansey’s audacious chip in injury time earned his side a share of the spoils against table-toppers Clann na Gael.

Rian McNamara’s first-half penalty handed the visitors a comfortable 1-8 to 0-5 lead at the interval but Ballinameen gave themselves some momentum ahead of their relegation play-off as Tansey found the net before striking again late on to leave the sides deadlocked at 2-11 to 1-14.

St. Dominic’s staged a second-half recovery to earn a share of the spoils against St. Faithleach’s, 1-12 to 0-15, in Ballyleague, but last year’s beaten finalists will have been worried by the sight of Keith Doyle being taken off injured in the second half.

The home side, led by Ciaráin and Diarmuid Murtagh, were utterly dominant in the opening half, leading by 0-12 to 0-7 at the break. Indeed, it could have been worse for the visitors, but goalkeeper Mark Miley made three outstanding saves to keep his side in the hunt.

They went on to duly make the most of that reprieve with a much better second-half performance — Darren Donnelly’s 45th minute penalty giving them fresh impetus.

While Donnelly would go on to score 1-8 of his side’s tally, David Rooney’s 57th minute point gave Faithleach’s a share of the spoils. However, Dominic’s better scoring difference handed them top spot in the group.

Éire Óg defeated Kilmore by 2-16 to 1-13 in a very competitive, free-scoring contest at James Timothy Park in Loughglynn.

The sides were level, 1-8 apiece, at the break — Conor Cox, who finished with 1-9 for the home side, and Brian Holahan finding the net for their respective teams.

Kilmore were ahead 1-12 to 1-11 at the end of the third quarter but Enda Crawley’s green flag swung the pendulum in his side’s favour.

As a result of this evening’s draw, Creggs are the third-placed team that have gone straight through to the quarter-finals, leaving Éire Óg and St. Aidan’s to battle it out in the quarter-final play-off. Castlerea St. Kevin’s, who finished in second place in Section A, will be the seeded team in the quarter-final draw alongside Clann na nGael, St. Dominic’s and Fuerty.

Kilmore will play Ballinameen in the relegation play-off, with the loser to play Shannon Gaels to see who is relegated to the Junior A Football Championship next season.