Roscommon youngster selected for Republic of Ireland U-15 squad 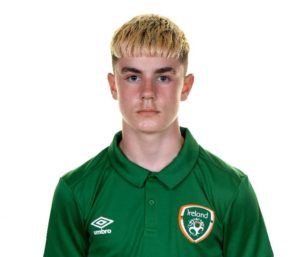 Christian Donlon has been selected on the Republic of Ireland U-15 squad of 18 players who will travel to Montenegro on Saturday next for two games against the hosts on the following Tuesday and Thursday.

The Cloontuskert youngster has a proud sporting pedigree. He played with Ballyboro FC at all age levels from U-6 to U-15 before moving to the Mayo League of Ireland U-14 team last year.

He has also paraded great athletic ability over the years, winning a gold medal for Roscommon in the U-12 100 metres at the 2019 Community Games National Finals in Limerick. He previously won a bronze medal in the 200 metres in 2017.

His outstanding football ability allied to his athleticism makes him an exciting prospect for the future.

The fact that Christian has been selected on the national U-15 squad at just 13 years of age is a testament to his ability.

It will be a proud moment for Christian, his family, and Ballyboro FC when Christian dons the green jersey of Ireland. He will be the first player who has played for the club to be capped for his country.

Christian is a student at Lanesboro Community College. He plays Gaelic football with St. Faithleach’s GAA Club and is a member of Lough Ree Athletic Club.