It could be argued that over the weekend gone by, the action in the intermediate championship here in Roscommon was at least as good, if not better than what we saw at senior level. St. Dominic’s made a miraculous comeback against St. Faithleach’s in a contest between two sides that could easily meet again, Kilmore went to Loughglynn and played out a humdinger of a game against Éire Óg, and it was end to end stuff in Kilbride between the hosts and St. Aidan’s.

Never mind the results however – it’s all about who got their names on the teamsheet for the Roscommon Herald team of the week!

This was the easiest call of the week as Miley produced a string of miraculous saves to keep his team in contention against St. Faithleach’s, particularly in the first half when the Ballyleague side were piling on the pressure, and looked in danger of moving out of sight completely. Tomás Gilleran will hope that his veteran goalkeeper isn’t as busy in subsequent games however.

The absence of James Brandon opened the door for the tenacious McPhilbin to step into the breach in the full back line for Creggs, and it’s hard to imagine that we’ll see another Creggs game this year where he’s left off the team. When it came to energy, focus, timing, tackling, McPhilbin offered it all and more against a lively Castlerea full forward line.

McDermott got his name on the scoresheet, drove forward effectively, and still looked after his defensive duties really well against St. Aidan’s. His use of the ball is very safe, very measured but still very effective, and he’s been a huge part of Kilbride’s return to form this summer.

Earley was everything you’d want from a corner back in Loughglynn – aggressive going for the ball but careful not to concede frees, decisive in his decision making and when he did collect possession, usually from a turnover ball, he injected pace into the play and quickly laid off the ball to a colleague in a better position.

The young auctioneer was going, going, gone every time he took possession of the ball in Kilbride, pushing forward to support the attack and add a little bit of zest to St. Aidan’s attacking play. Like most of his colleagues, he put in a lacklustre showing against Clann in the previous round but bounced back in style here. 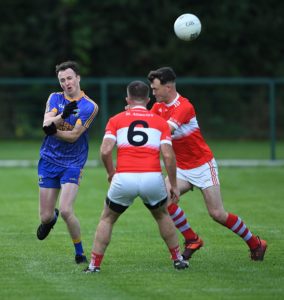 Cathal Meares (left) put in a very impressive hour for St. Aidan’s at wing back.

Something strange happened to the Flynn family at the weekend. Not alone did both Stephen and David put in very assured defensive performances – there’s nothing new or unusual in that – but both men also got on the scoresheet. It would take a fairly clued-in Clann historian to find the last time that happened. It was fitting reward for a very strong performance by both men, and David takes his place here as a result.

This is our slot where we take a big positional liberty for this week, but if we were managing this team in real life, we’d have no hesitation in handing a number seven jersey to the Castlerea flyer. He lines out at full back but loves to take possession and simply accelerate through opposition tackles, putting other teams on the back foot straight away.

Perhaps because they had too many good options, Crawley started this championship campaign deployed at left wing back. He needs to be in the centre however as he dominates proceedings in this role, both under the high ball and from general play. He stands like a towering fielder in the mould of a Darragh Ó Sé or David Moran, but can also get forward to contribute on the scoreboard, as seen by his goal and two points on Sunday.

Two appearances out of three in our team of the week selections for Rooney, and he wasn’t far away in week one either. As long as he continues to contribute so freely on the scoreboard and from general play, he’ll be a key player that opponents need to marshal very carefully.

In the absence of Gearóid Ennis and Niall Kilroy, Lyons took on the responsibility of leading the Fuerty attack and he did it in some style, scoring 1-2 and playing a key role in a lot of his club’s best attacking play at Dr. Hyde Park. His return to form will be vital to his club’s chances in the bigger knockout games that are coming down the tracks. 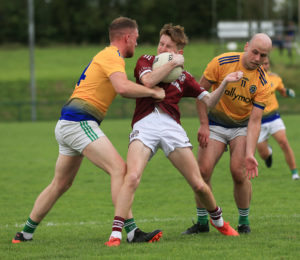 Darren McDermott (right) was the focal point of Castlerea’s attack against Creggs.

The veteran attacker has an incredible knack for making himself invisible for a couple of moments, then popping up at the best possible time to either convert or set up a score for his team. Four points is another very good tally and so much of Castlerea’s best attacking play came through their talisman on the 45.

Cox was at his very best on Sunday, initially at centre forward and then in front of goal, turning every type of delivery into scores. Jack Sharkey didn’t do a whole lot wrong for Kilmore but what’s a defender to do when his marker can compete in the air, is able to get out in front and hook points over the bar while facing the wrong direction?

Again, wing forward is the wrong slot and Killian Bannon is entitled to feel hard done by in particular, but leaving Cox off this team wasn’t a plausible option.

If you give this man chances, he will finish them. Donnelly ended the game in Ballyleague with 1-8, his goal coming from a penalty, as he relentless punished St. Faithleach’s every time he got an opening to do so. Donnelly is very much a traditional corner forward rather than a modern, box-to-box all-rounder, but if he keeps delivering like this, nobody in Knockcroghery will have any problem with that.

After starting this championship slowly with a very moderate performance in round one against Éire Óg, Murtagh has exploded into life since and once again was all but unmarkable against St. Dominic’s. He’ll be a little disappointed that he didn’t add a goal to his tally, but there will be other, more important games where he’ll look to put that right. Tom O’Grady of Kilbride played to a standard that would have been good enough to get on this team a lot of weeks and he’s the only Roscommon Herald ‘Player of the Match’ winner not to be included, but the competition for the number 14 jersey was just too hot.

There was only pride on offer when Clann played Ballinameen at the weekend, but the home side at Davonna Park salvaged plenty of it with an excellent draw, a result that will give them a huge boost going into the relegation playoffs. James Tansey was the best player on show by some distance, cracking in two excellent goals as part of a 2-6 haul.