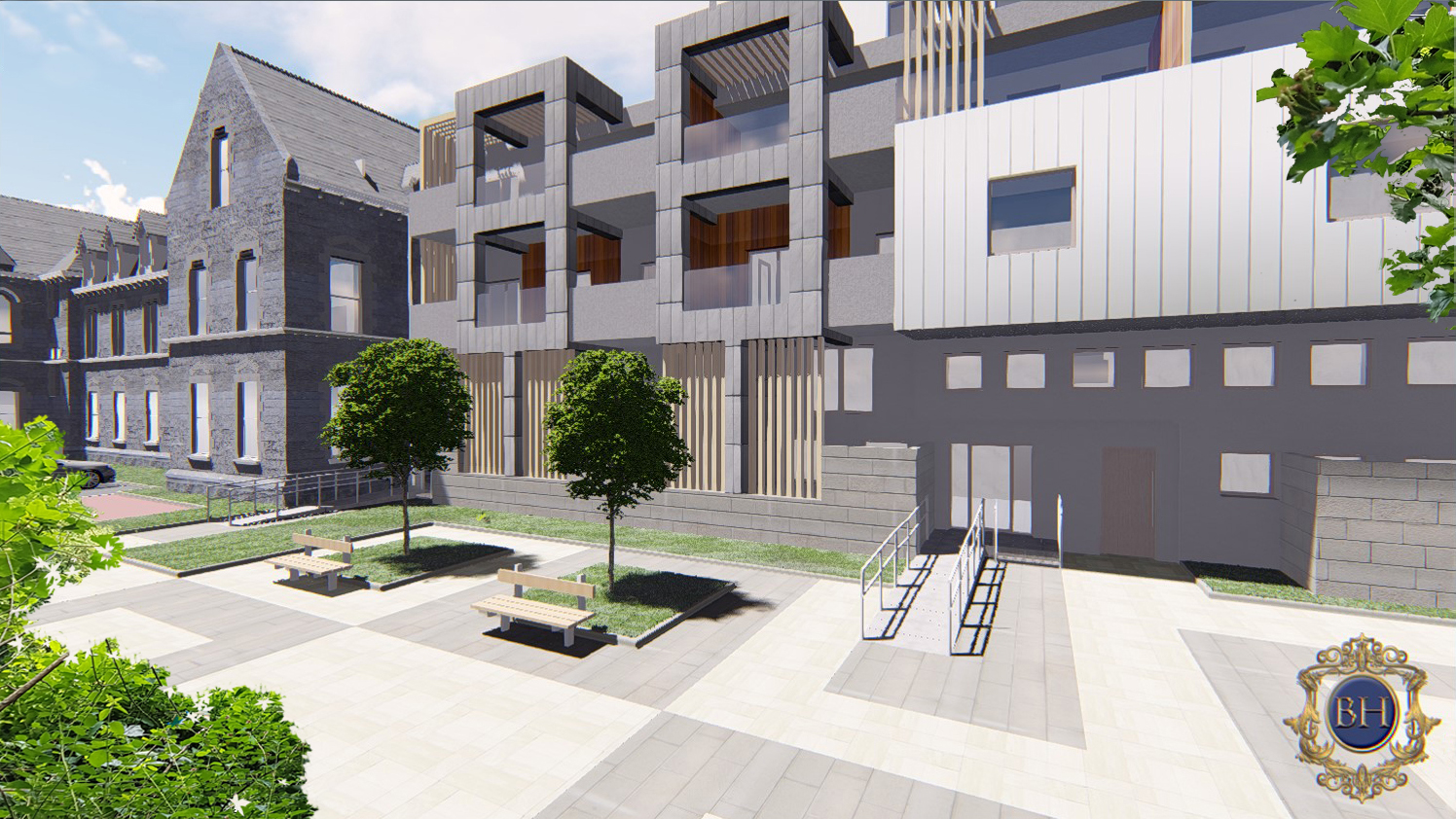 A major €38m development of 99 apartments and three houses is set to transform the former Our Lady’s Bower School in Athlone. Material planning permission has been granted for the project, ‘Bower Hall’ to the County Roscommon company, Wincove Construction, part of the Hanly Group.

The developers plan to combine existing features of the current buildings on the site of the former school with state-of-the-art new design.

The site was bought by the Elphin registered company from the La Sainte Union of Sisters for an undisclosed sum. The school closed in 2015 to move to a new site.

Work on the site is expected to commence in the final quarter of this year and it is hoped the development will be completed in late 2023.

The Hanly Group, owners of Kilronan Castle in North Roscommon and Lough Rynn Castle in Leitrim,

say that the planned development will remain faithful and complement the existing building environment on the site of the former school.

“We are retaining the original cut stone building, which dates from the 1850s. We will also be remodelling the former 1960’s school extension which we will be remodelling while retaining its current façade,” Alan Hanly, CEO of the Hanly Group told the Roscommon Herald.

The project, modelled on new modern apartment designs in Sydney, Australia, will also feature a museum, located in the old school building and visitor library, highlighting the unique legacy of the La Santa Union in the town, whose past pupils include actress Jeananne Crowley, star of the movie ‘Educating Rita’ and former district court judge, the late Gráinne O’Neill.

“The Bower building and the school itself has always been held in the highest of esteem in Athlone. We intend to consolidate that fine reputation. The site has had an international and national reputation and will continue to be at the heart of Athlone town,” said Mr Hanly.

“We are delighted that Ann Beades, current president of Our Lady’s Bower will be supporting the research and development of the museum and library, which will ensure the legacy of the school will be remembered and cherished in this new development,” he added.

Each apartment block will have units with computer-based utility controls by way of the use of apps for heating and lighting. Apartment sizes will range from 850 to 1400 square feet.

“What attracted us to invest in this development was the genuine cut stone building on a site which is of very significant quality. The Hanly Group has experience in rejuvenating and revitalising old stone buildings of considerable significance,” said Mr Hanly.

The new apartments will be separated by tree-lined areas, contained within a larger landscaped area, located on the old school site, on Athlone’s Retreat Road. “Already we’ve been told by our agents that there are enquiries about the apartments, particularly from retiring couples who wish to downsize,” said Mr Hanly.

“Companies in Athlone are looking for quality accommodation and of course Athlone Institute of Technology is doubling in size with its increased connections with the University of Limerick. Athlone has also been designated a major regional growth centre under the Government’s 2040 National Planning Framework.

“Recently, the development received the full backing of members of Westmeath County Council for a material contravention. The business community and the community at large in Athlone is very supportive of our plans,” said Mr Hanly.