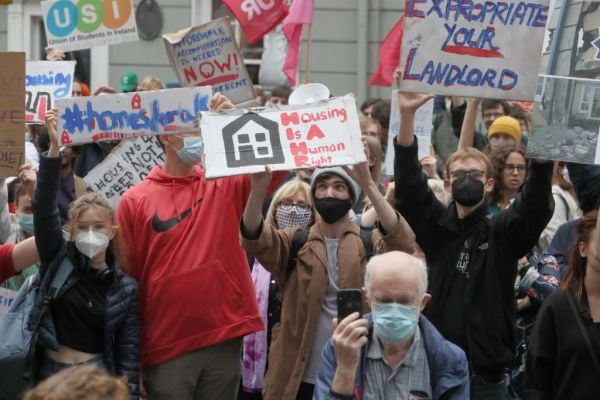 A large crowd gathered outside Leinster House on Wednesday evening to demand more action from the Government on housing.

Hundreds of people gathered in the city centre on the same day TDs reconvened after the summer recess.

The rally was attended by several TDs, including representatives from Sinn Féin, the Social Democrats and People Before Profit.

“Homes for people, not for profit,” the crowd chanted.

The crowd was also addressed by Paddy Diver, one of the leaders of the campaign demanding a 100 per cent redress scheme for housing defects caused by the mineral mica.

Minister for Housing Darragh O’Brien has promised answers for Mica campaigners by the end of September from a working group considering a compensation scheme.

The housing protest came only days after the Government announced a major plan to tackle the housing crisis.

The plan, which the Government has described as “unprecedented”, promises to build 300,000 new homes by the end of the decade on an annual budget of more than €4 billion.

In what it describes as its largest ever housing budget in the history of the State, the plans aims to reach 33,000 homes every year for the public and private sector.

Earlier, when members of Extinction Rebellion protested outside the Dáil, one man in his 40s was arrested for what gardaí said was a “public order offence”.

Angela Deegan, from Dublin, said: “I have been aware of the climate crisis for many years now and how bad it’s getting and how little action there is in our Government.

“We need things to change in our systems so people cannot be emitting so much greenhouse gas.”

She said Ireland needed to cut the size of the national herd and to better insulate buildings as part of a range of measures to reduce the impact of climate change.

Some protesters expressed disappointment at the Greens’ record in Government so far.

Eamon Ryan’s party gathered in south Dublin earlier this week for a think-in, and the leader said that, in the coming months, they would build on the successes of their first year in the coalition.

The Government’s latest action plan for tackling climate change will be published in the first week of October.

Sean Loughran, from Dublin, said he voted for the Green Party at the last election but has been disappointed by the party so far.

“There hasn’t been an end limit put on combustion engines yet.

“I think we need to move towards a more plant-based food system and there’s no word of that yet.

“I’m not as optimistic about the Green Party any more.”