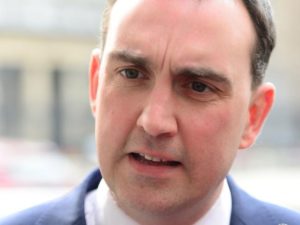 Sligo/Leitrim TD Marc MacSharry has resigned from the Fianna Fail parliamentary party and will vote no confidence in Foreign Affairs Minister Simon Coveney.

The son of former Fianna Fáil minister Ray MacSharry has been a long-time critic of Taoiseach Micheál Martin’s leadership of the party.

In his communication to colleagues Marc MacSharry claims that Fianna Fáil’s “positioning and policy are being determined in a fashion consistent with an undemocratic totalitarian regime rather than that of a democratic socialist republican party of and for the people.”

He writes: “I therefore have no option but to resign the Fianna Fáil Parliamentary Party whip effective immediately and I will be voting no confidence in Minister Coveney this evening.”