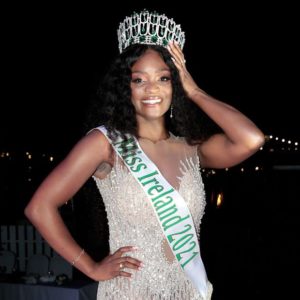 A County Roscommon school has congratulated its past pupil who has been crowned Miss Ireland.

Irish beauty-pageant history was made when Pamela Uba a 26-year-old medical scientist, became the first black woman to be crowned Miss Ireland in a contest that has been running since 1947. She represented Galway in the competition.

Pamela was born in South Africa and moved with her family to Ireland at the age of seven. She spent the next ten years living in direct provision with her mother and three younger siblings. While in Direct Provision, she attended Gorthaganny NS.

The school acknowledged on its social media that “it’s not every day that a past pupil becomes Miss Ireland. Congratulations Pamela Uba.”.

Others described Ms Uba as a “stunning” and “lovely” person, recalling that she was a member of the school’s team which won a county soccer title and a Cumann na mBunscoil title.

“I was very young when we moved. All I know is that my family’s business went bust and it was quite hard to survive without that because we didn’t have the supports that other countries have in place. I was seven years old, my siblings were aged four, three and two, and my mum couldn’t do it. She had to make the decision to move to make sure that her kids had a roof over their heads,” Pamela told the Irish Examiner.

Pamela settled into life in Ireland quite quickly, which she credits to her young age and her ability to speak English. Her family stayed in the direct provision system until she was in her first year of college.

In December she will represent Ireland at the 70th Miss World  festival, in Puerto Rico. “I can’t even describe how excited I am to represent my country on such a huge platform. I can’t wait.”

She hopes to use her Miss Ireland title to represent a more diverse Ireland.