‘Solution must be found for farmers affected by flood and fire’ 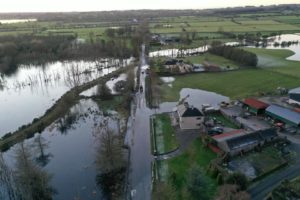 The Oireachtas Committee on Agriculture, Food and the Marine has been asked to examine basic payment penalties applied to farmers whose land has been affected by flood or fire.

In recent weeks, the Department of Agriculture has reaffirmed its decision to penalise farmers whose land was affected by a fire that began on state lands in Killarney National Park, and which the Gardaí found no evidence of criminal involvement.

Earlier this year, farmers in the surroundings of Lough Funshinagh in  Roscommon were informed by the Department that they may face similar penalties as a result of rising water levels in the lake.
Sinn Féin spokesperson on Agriculture, Matt Carthy TD said “These two recent cases have highlighted how vulnerable farmers are to events entirely outside their control.

“While anyone involved in business will be familiar with various market, and indeed natural or climate associated risks, farmers are unique in that the financial penalties imposed on them are entirely political in nature.

“Minister McConalogue should explore any and all options to resolve these issues, including engaging with the European Commission to find a solution for those affected farmers this year.

“In the medium term, he must explore what flexibility the new CAP will offer in this regard.

“The Oireachtas Agriculture Committee can also play a proactive role in finding a resolution to this issue.

“I have written to the Committee Cathaoirleach requesting that the Minister provide us with a briefing on the issues involved, and that we invite the relevant department officials, as well as representatives of those affected, to appear before the Committee to outline their proposals and experiences.”