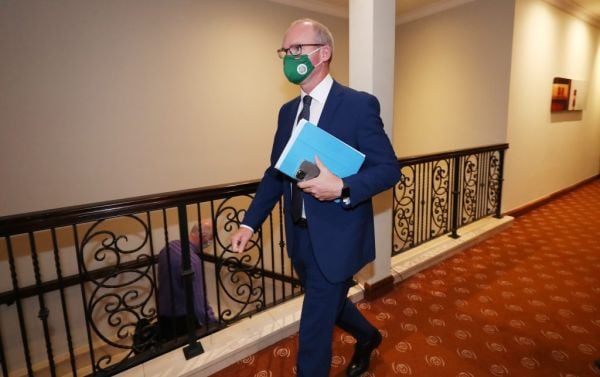 Simon Coveney was “acting in good faith” when he deleted text messages relating to official business, the Taoiseach has claimed.

Micheál Martin defended a decision by the Minister for Foreign Affairs to clear conversations he had with the Tánaiste and a former government minister from his phone.

However, Mr Martin also said that any records, including text messages, that relate to government business should not be deleted.

Speaking in the Dáil as TDs returned to Leinster House following the summer break, Mr Martin said that was clear to his government colleagues.

Mr Coveney has come under fire after he admitted to deleting communications he had with Katherine Zappone and Leo Varadkar about the controversial UN special envoy appointment.

He first claimed that he deleted the texts to clear his phone of data, but then later said he often deletes texts because his phone was previously hacked.

Under Freedom of Information legislation, it states that Government ministers have to keep all official electronic communications which are subject to the legislation.

Mr Martin told the Dáil: “Any records relating to public or government business should not be deleted, and I’ve made that clear to all of my government colleagues.

“I do believe that Deputy Simon Coveney was not acting in bad faith, and he had explained to the committee circumstances and the context in which he took that action.

“I think he, at all times, I genuinely have to say I think he’s acting in good faith.

“Any records pertaining to government business should not be deleted.”

‘Stinks to the high heavens’

The Taoiseach was responding to questions from Sinn Féin leader Mary Lou McDonald.

“He deleted these texts and he failed to send the communications to his department for filing and storage,” she said. “These were no ordinary texts.

“These were communications between two of your senior cabinet ministers in relation to government (business).

“They were official government information and communication and the Freedom of Information Act is very, very clear.

“Communications carried out on electronic devices such as phones, or email relating to the official function of a minister, are subject to that legislation.”

She added: “Freedom of Information is in place to allow citizens to obtain information about decisions that affect our lives and our society.

“It’s fundamental to democracy, for journalism, for activism, and it’s absolutely critical in holding power to account.

“So a minister erasing government records in such a fashion stinks to the high heavens.

“It is in my view, an abuse of office plain and simple.

“I think it’s corrosive to politics, and it’s insulting to people.

“This behaviour was unacceptable, and it has angered people not pleased because it demonstrates a breath-taking arrogance.”

Mr Coveney has defended his decision to delete the texts, saying they were cleared before Freedom of Information requests were sent by the media.

The Dublin TD called for Mr Martin to confirm how he will ensure other Cabinet ministers do not delete text messages that relate to Government business.

Mr Martin said that the Minister for Public Expenditure Michael McGrath is bringing forward a memorandum to government about a review of the Freedom of Information Act.

“That will come before government very, very shortly.

“Perhaps next week in respect of the broader operation and working of the Act,” Mr Martin added.