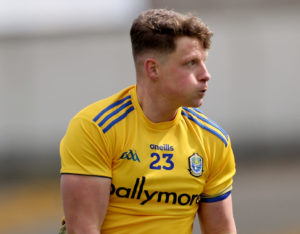 Conor Cox inspired Éire Óg to victory this evening as his personal haul of 1-6 enabled his side edge out St. Aidan’s for the final quarter-final berth in this season’s intermediate football championship.

The West Roscommon side were hanging on at the end, but they still managed to prevail on a 2-9 to 1-9 scoreline at a damp Dr. Hyde Park.

Cox was at his brilliant best during the opening 30 minutes. The Aidan’s defence couldn’t handle his ability to win his own ball and kick scores off either foot.

In the 19th minute, he won a mark and, with the St. Aidan’s defence not switched on, he blasted the ball to the roof of the net for a brilliant individual goal.

Indeed his side’s total of 1-6 after 28 minutes came from his match-winning contribution before Liam Creaton got in on the scoring act to leave Éire Óg 1-7 to 0-4 ahead at the break.

St. Aidan’s midfielder Gary Kelly hauled his side back into contention with a fine 32nd minute goal but when Cox unselfishly squared possession for Creaton to find the net, Éire Óg were in the box seat once more at the second-half water break.

Éire Óg will play Castlerea St. Kevin’s, Fuerty or Clann na nGael when the draw for the quarter-finals is made on Sunday evening.

Meanwhile, Kilmore maintained their intermediate status with a comfortable 1-19 to 0-8 victory against Ballinameen at Strokestown this evening.

Ballinameen were competitive early on, but when John Gannon, Brian Connellan, Shane Crowe and Kevin Caslin found their scoring range, Paul Taylor’s side took over.

Paul Garvey’s 25th minute goal helped Kilmore into a 1-9 to 0-3 interval advantage, and they comfortably kept Ballinameeen at arm’s length to ensure that there will be intermediate championship football to look forward to in Kilmore next season.

Garvey’s was Kilmore’s top marksman, hitting 1-7 over the hour, including 1-6 from play.

Ballinameen now play neighbours Shannon Gaels to see who makes the drop to Junior A football in 2022.