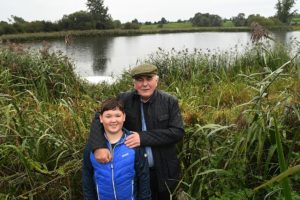 A young Tulsk man is being hailed as a hero after dramatically saving the life of his grandfather following a near fatal incident on Killina Lake, Killynagh Beg, near Tulsk, last Thursday evening.

The prompt and brave actions of eleven year old Callum Clarke, a sixth class pupil of Tulsk National School saved his grandfather Sean Stroker from almost certain drowning after a freak gust of wind capsized their boat, shortly after 7 p.m..

Only for Callum’s prompt actions, a certain tragedy was averted as the young man, son of Kevin and Jackie Clarke of Kilcooley, Tulsk, managed to pull Sean from the water and bring him to the shoreline to safety.

After being brought out of the water, Sean was attended to by a paramedic and was taken by ambulance to Mullingar General Hospital. He was detained for a short period of time before being released from Hospital on Friday, shortly after 6 a.m..

Callum’s father Kevin, who operates a well-known bus hire business, was clearly relieved yet emotional when recalling Thursday night’s dramatic events: “Sean was about to sit down on the boat when a freak gust of wind saw him fall off the boat and into the water.

“Sean went straight down in the lake, even though both Sean and Callum had life jackets on them. Sean couldn’t breath and was taking in water. With the coldness of the water and Sean struggling for breath, he thought he was drowning and about to suffer a heart attack.

“Callum kept calm throughout, a lot calmer than I would in such circumstances. Luckily, he saw part of the board which was on top of the seat of the boat which had broken when Sean entered the water. He managed to get the board and put it behind Sean’s arms for him to hold onto and bring him to the shore.

Sean, who lives beside the lake with his wife Mary, had his phone in his pocket which was obviously distraught when he went into the water. Luckily Callum had his phone in Sean’s jeep and managed to ring NowDoC before an ambulance and a paramedic arrived at the scene.

Killina Lake, which is located to the rear of the local St. Catherine’s Church, is located approximately a half a mile off the main N61 road between Tulsk and Elphin. At this time of year, the lake, which is located close to a local spring which is the local water supply source, would be considerably cold, making Callum’s quick actions all the more commendable.

“Both Callum and Sean were out fishing at the time of the accident. They recently acquired their boat. The lake is renowned for pike and perch fishing but unfortunately their fishing line got stuck in reeds shortly before the freak gust of wind threw Sean overboard.

“Sean was white and was very shaken after being taken out of the water. Luckily, he’s made a good recovery but he’s still a little shaken.  I was outside my own house at the time when my wife received the call. At that time, I had noticed the wind had increased significantly in a short space of time. Callum saved his grandfather’s life. My brother-in-law Jonathan, who is a fire fighter in London, said that what Callum did was heroic,” says Kevin.

For more on this story, see Tuesday’s edition of the Roscommon Herald.