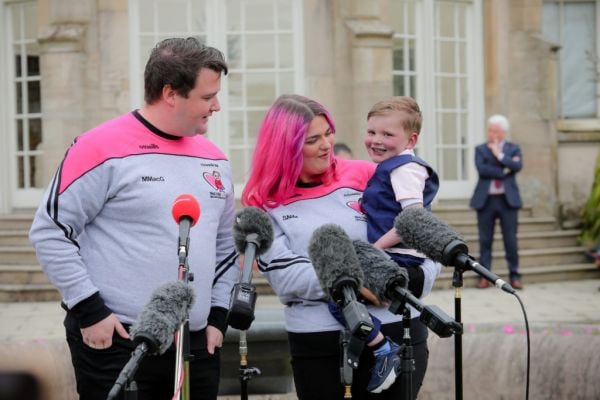 The father of a young boy who has been waiting more than 1,200 days for a new heart has said it would be a travesty if Stormont collapsed before new laws on organ donation are introduced in the North.

Máirtín MacGabhann said getting a new heart is the last chance for his four-year-old son Dáithí.

MLAs are due to debate a major change of Northern Ireland’s organ donation rules on Monday.

Proposed new legislation would mean people automatically become donors unless they opt out.

The opt-out system is already in place in England, Scotland and Wales.

A decision by the DUP in June to support the new legislation meant that it looked set to pass through Stormont before the Assembly is dissolved ahead of elections next May.

But recently, DUP leader Jeffrey Donaldson has threatened to collapse the powersharing institutions within weeks due to opposition to the Northern Ireland Protocol.

This has led to fears among campaigners that there would not then be enough time to pass the Bill before the institutions fall.

Mr MacGabhann told the PA news agency: “We are delighted that it has got to this stage where the elected representatives can now discuss it. Our hopes are that the politicians will be all supportive because we think it is the right thing to do.

“There can be no more delays to this potential legislation. We feel that this potential law change is another step in normalising organ donation in society. If you look at the countries around us, we are last to the party. But we are there now and hopefully it will get over the line.”

Asked about the potential threat to the Stormont institutions, Mr MacGabhann said: “We have no control over that and if it were to collapse we would be the first people knocking on the door again, like we were when Stormont resumed last time.

“But that doesn’t mean we wouldn’t be absolutely heartbroken. What I would say to the politicians who are maybe considering collapsing Stormont is we understand there are other important issues, but we believe the best way to solve them is through Stormont in the democratic process so that it continues to operate and life-saving legislation has the best chance of getting through.

“We can’t wait any longer because it will take time for this Bill to come into effect, there would be a year’s awareness campaign and then it would take time to settle in.

“Imagine having to wait another couple of years to get to the stage that we are at now, it would be a travesty. It would be heartbreaking.

“We have no control over it and we are just hoping for a positive response because organ donation and transplantation is the last resort. It happens when all other avenues have been exhausted.

“Imagine the person you love most in the world had a better chance because of this going through, to us it is just a no-brainer.

“My son’s last chance is to get a new heart.”