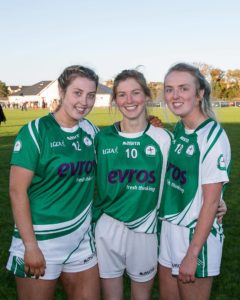 The 2020 Roscommon LGFA senior and intermediate champions clashed on Sunday morning in Kilbride in this year’s senior championship, and it looked for long spells as if this game might mark the passing of the baton from one generation to the next, with St. Brigid’s dominating the six-in-a-row chasing home side. Áine Ó’Brien was in electric form as she fired in all four goals in the first half for the Kiltoom club, who led by 4-4 to 0-2 at the interval, aided by a brilliant penalty save from Holly Martin.

The scores kept coming in the third quarter, with Kate Nolan adding a fifth goal and a couple of points to push the lead out to 17 points, 5-7 to 0-5, but a goal from Niamh Shanagher just before the water break gave what would have been to most clubs, the faintest glimmer of hope.

“We never stopped believing we could win, that’s the way we are as a team,” Fiona Tully said this morning, and sure enough her club exploded into life after the water break. Three goals from teenage full forward Aisling Hanly flipped the game around completely, and with huge momentum now at their backs, they kept piling on the scores until a late Áine Griffin goal deep into injury time secured a one-point win, 6-7 to 5-9.

“We’ve had to change the team around completely this year, we’ve had two retirements, four pregnancies, Rochelle (Mullaney) has been very sick but is still around the panel and our entire full back line is out injured, but there’s still great spirit in the group and we knew we were never out of it”, said Tully.

“We played out of our skins in that fourth quarter, as well as I remember us playing in any game, because that’s a very good St. Brigid’s team and we know they’re going to be serious championship contenders over the next few years. Of course, we should have played like that all along, but we found a way to win and that’s all that matters!”

Kilbride will now take huge momentum into next week’s game, a rematch of the 2020 senior final against Shannon Gaels, while St. Brigid’s will need to regroup for a must-win clash with Western Gaels.