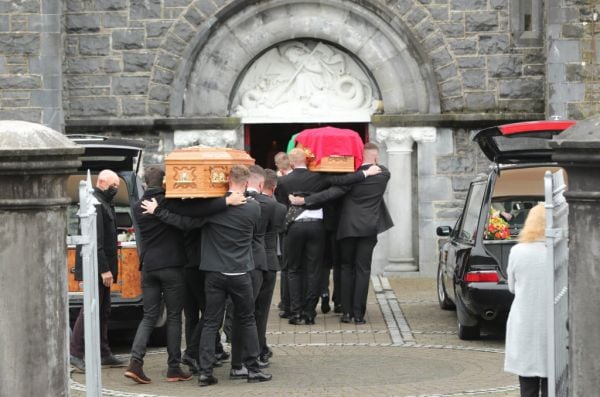 Words have been described as “inadequate” to comprehend the loss of life as a mother and son were laid to rest in Co Kerry.

Eileen O’Sullivan (56) and her son Jamie (24) were found dead at their home in Kilfeighney near Lixnaw two weeks ago.

The body of husband and father Mossie O’Sullivan (63) was found close to the house.

A legally held firearm was found at his side.

Gardaí are investigating the deaths as a suspected murder-suicide.

At a funeral service at St Michael’s Church in Lixnaw on Monday, parish priest Fr Anthony O’Sullivan described the deaths of the three as tragic.

“Words seem inadequate to comprehend this tragic loss of life,” he said.

He described Mrs O’Sullivan and her son as “kind, gentle and went about their lives with dignity”.

“Eileen was a diligent worker, Jamie was a skilled welder,” he said.

Jamie had been due to graduate from Tralee IT in January.

Outside the church, his colleagues from Liebherr Container Cranes wore yellow arm bands and formed a guard of honour.

Last year a father and his two sons died in a shooting incident at Kanturk, Co Cork.

Earlier this month Taoiseach Micheál Martin indicated that he would be open to a conversation about changes to gun laws in the Republic.