Free-scoring goalkeepers and 3-19 from the full-forward line – it’s the Team of the Week!

With just four senior and intermediate games down for decision this week, the decision taken within the hallowed halls of the Roscommon Herald was that in order to preserve the prestige of official “Team of the Week” selection, just one list of 15 players would be nominated and lauded for their performances on the field of play on the weekend gone by. Selection for this hypothetical team is a dream of every player who togs out on the Roscommon senior and intermediate championships every weekend, so this way there can be no accusations of players just getting picked on a soft week!

It was a great week for Pádraig Pearses and Elphin, Kilmore avoided slipping up against Ballinameen while Éire Óg scraped over the line on the back of another shooting master class from their talisman up front, while Western Gaels, Tulsk and St. Aidan’s get one slot each despite falling short to varying degrees.

Full reports on all games, as usual, can be read in this week’s Roscommon Herald, which is currently on sale. But to give you a flavour of the action that took place, here’s the list of the stars of the weekend’s action!

Short of bursting out of the blocks in a Usain-Bolt like fashion to get to midfield to catch his own kickouts, Brady couldn’t have done any more for Elphin in their great escape on Sunday afternoon. His long-range dead ball striking was immaculate, he was imperious under the high ball and his smothering save to deny Jack Higgins a goal for Western Gaels shortly before half time was absolutely vital to their cause.

Just one senior and one intermediate player retain their slot on Team of the Week, and for as long as Richardson continues to defend with such controlled aggression and such measured discipline, he’ll always be there or thereabouts. A much bigger test is on the way in the form of the Boyle forward line, arguably the most dangerous sextet in the county at the moment, but there isn’t an inside forward out there who would relish a battle with Richardson right now.

After marking Conor Cox a week previously, it was a much easier day at the office for the Kilmore full back last Saturday against Ballinameen. Everything went according to plan for Paul Taylor’s side, but a lot of that was down to how his defensive unit, with Sharkey to the forefront, was completely in control of proceedings.

Roscommon’s most well-known barber doesn’t buzz around the field quite as much as he used to, but his attacking forays are incredibly well-measured, while there are still very few players that would beat him in a straight race for a ball over ten metres. He did his best to drive his team’s comeback on Sunday, but couldn’t do anything about their complete meltdown in front of the posts. 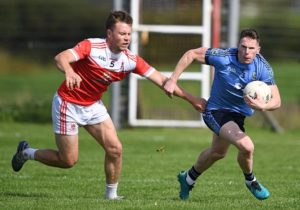 Both Seán McDermott and Niall Daly are included in our team list this week.

It’s a measure of Greene’s overall ability that he has been deployed at midfield, half forward and now half back for Éire Óg, and he invariably puts in a solid shift wherever he goes. When St. Aidan’s piled on the pressure in the second half, they got a lot of joy down their right, or the left side of the Éire Óg defence. Greene and John Carty held their ground far better on the opposite wing.

Even in Roscommon’s run to the All-Ireland U-20 final this year, it’s doubtful that Gaughan put in a performance anything like his showing on Sunday against Pearses. That there was so much pressure coming his way made his efforts even more laudable. Both in defence and going forward, he was the best man on the field in a maroon jersey, and he probably did enough to guarantee selection for the county senior panel in the next couple of months.

The bleach blonde hair is a thing of the past but on this form, Murray is well able to stand out purely on the merits of his play. His reading of the game, the forceful way he competes for breaking ball and his clever distribution when in possession is all right from the top drawer.

When Pearses are struggling, they look to their main man at midfield to lead the way. When Pearses are going well, it’s usually because Niall Daly is controlling matters in the middle third. It’s a testament to his consistency that this wasn’t an exceptional performance by his standards, but it was still hugely effective.

Coming into Saturday’s intermediate playoff, Éire Óg’s midfield looked like their trump card. In Jamesie Greene and Enda Crawley, the Loughglynn club have two county underage stars, both that are specialists at eight or nine – and yet the leading light in that area was Treacy, who outfought them both and ensured that St. Aidan’s had more than enough possession to build up a winning total.

It would be an exaggeration to say it was a tour de force from the youngest of the Daly quartet, but it was still a quietly effective performance that saw him cover plenty of ground, play a huge role in building up their tackle count and in their build up play, not to mention icing the cake with two points.

Five points from play, probably somewhere in the vicinity of a couple of dozen possessions, and very much the orchestrator of the Kilmore choir on Saturday evening. The move back out to the half forward line suited him down to the ground. 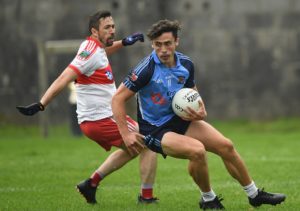 Kilmore centre-forward John Gannon was in superb form on Saturday.

Every week we have to take one or two positional liberties in order to acknowledge all the best performers on the field, and while Gerry Cregg played at 15 for Elphin on Sunday, the fact that he was a half forward in their three group games means he gets selected here.

Simply put, we couldn’t leave him off. While he was out of the game for long spells, his two goals were superbly taken, the first in particular was nothing short of a work of art.

1-7 in total, 1-6 from play, and even allowing for the relatively bountiful tree of passes from which he could harvest, it was a very good showing from the Kilmore attacker. Many of those scores came from distance or difficult angles, including a particularly eye-catching effort in the 33rd minute.

There isn’t much left to be said about the former Kerry player, who continues to carry Éire Óg through this championship. By half-time his team led by 1-7 to 0-4, and he scored 1-6 out of the 1-7, including a goal that 99% of players wouldn’t even have imagined, never mind executed.

Carey was back to his very best on Sunday, kicking points from all sorts of angles and offering himself as a primary target for long ball deliveries as well. It was notable too that because he was so much more of a threat, that Hubert Darcy beside him enjoyed so much more space to get involved in the game.